How farmer-supported buffers are protecting our waterways

Farmers are protecting water in a number of ways. One of the most important is participation in the Conservation Reserve Enhancement Program (CREP) administered by the Washington State Conservation Commission.

​In this program farmers receive financial incentives to take farmland out of production to support riparian buffers protecting streams.

In the fifteen years of operation, this program has:
– restored and protected over 800 miles of streams
– planted native vegetation in over 14,000 acres of riparian area (that’s nearly three times the acreage of all the parks in Seattle)
– planted over 530,000 trees and shrubs
– installed over 1.5 million feet (285 miles) of fence to protect buffers from farm animals
– provided buffers whose average width is 142′ with 80% having widths of 100 feet or greater. Most common width is 180 feet with some larger.

But…are they doing any good?

(Are they improving water & helping salmon?)

In 2011, the CREP monitoring results were examined in concert with salmon numbers and water quality measurements (Smith 2012a). Two watersheds showed significant improvement in at least one of those two environmental goals. Water temperatures in the Tucannon River decreased by 10o F in the decade following riparian restoration Agricultural Field 31 (Steve Martin, Snake River Salmon Recovery Board, personal communication). As water temperatures cooled, juvenile spring Chinook salmon began using 20 miles of the river that were previously too warm. Adult returns of spring Chinook also increased (Gallinat and Ross 2011). In this example, both salmon and water quality improved. The second example is in the Nooksack Basin, where Ten Mile Creek had a significant level of riparian restoration, much through CREP, and also showed an improvement in summer water temperatures (Smith 2012a). 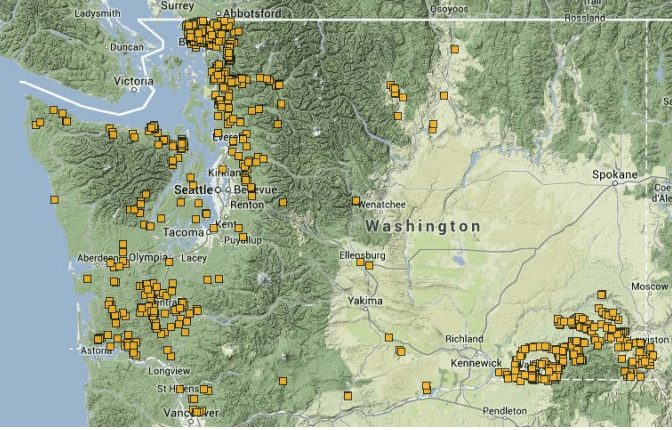 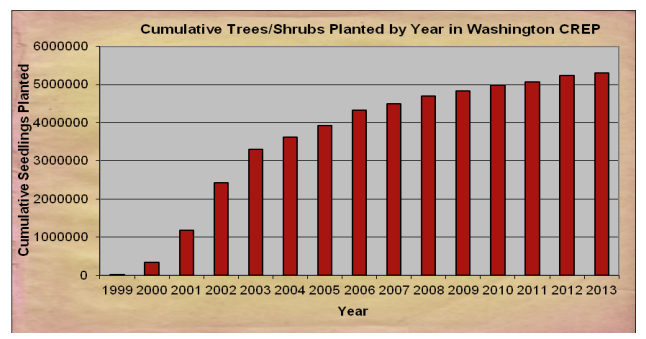 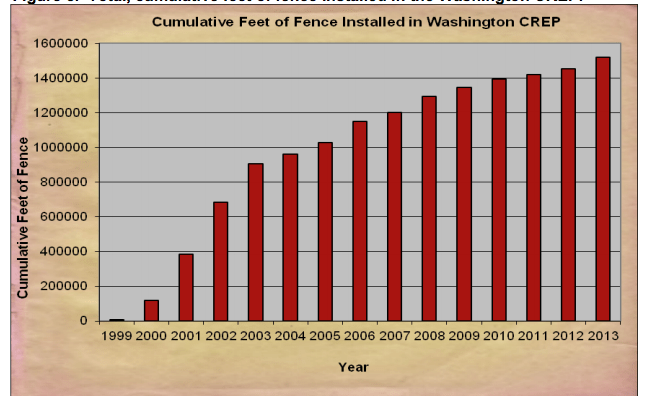 The scientists managing the CREP program make it clear that requiring larger buffers will have a negative impact on the success of this program:

“Even with the demonstrated success of the Washington CREP coupled with average wide buffer widths, efforts are underway to increase the minimum buffer width from 35’ to a significantly wider buffer. One suggested increase is to 100’. Widening our minimum buffer requirement will reduce the ability to develop sitespecific plans that consider constraints within parcels that include: topography, hydrology, agricultural use, infrastructure, property boundaries, and valley configuration. Increasing the minimum width will not increase overall buffer widths in the program. Instead, the expected results are a decrease in some of the buffer sizes at the farm scale and decrease in the number of contracts. This will result in less stream length covered by high quality buffer; an overall decrease in riparian restoration at the watershed scale.”

From the 2013 Implementation and Effectiveness Monitoring Results for the Washington CREP: Buffer Performance and Buffer Width Analysis. 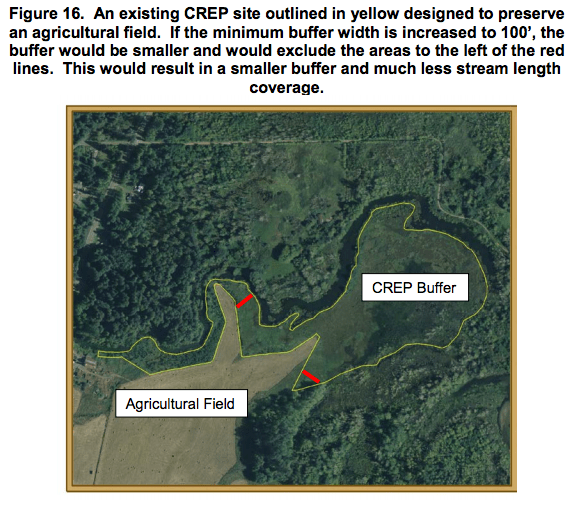 Continuing and expanding on this successful program
​

To increase buffer length, increased participation and more contracts are needed. Increasing the buffer width will have the opposite effect. Instead, there are other actions that can have a positive effect on participation. These include:
• Increase financial incentives to increase participation. This could be used to prioritize areas or to increase sign-ups statewide.
• Target contiguous landowners within a watershed. This has been shown to lead to increased water quality and salmon numbers in the Washington CREP (Smith 2012a). Priority watersheds could be identified and additional outreach efforts used to target those areas. This could be combined with higher financial incentives.
• Increase financial incentives to those who enroll a wide buffer. While they already receive more money because they are enrolling a greater amount of land, this could be further incentivized if wider buffers are desired.
• Reduce financial constraints on buffer enrollment in CREP. These include the cap on CRP and CREP payments and the Adjusted Gross Income cap.