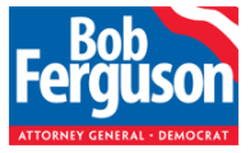 Attorney General Bob Ferguson is very pleased with getting what appears to be the largest campaign law violation fine in our nation’s history. Here’s what his report today says:

Yesterday, the judge issued what is likely the largest campaign finance penalty in our nation’s history. Finding that GMA intentionally violated Washington’s campaign finance law, GMA must pay a total of $18 million in penalties, and reimburse taxpayers for our legal costs.

This ruling sends a message to those trying to influence our elections: No one is above the law and lawbreakers will be held accountable, no matter how powerful they are. Together, we made it clear that when powerful interests choose not to play by the rules, we the people will have our day in court.

As your Attorney General, I’m committed to protecting Washingtonians’ rights and holding the powerful accountable. That means leading the charge to defend our campaign finance laws and ensuring those that break the law face the consequences.

Let’s keep up the fight!

We certainly hope you do keep up the fight for our state’s campaign laws related to What’s Upstream. While the grocery companies were deemed to have not properly disclosed the individual companies involved in the political campaign related to an initiative, at least the initiative campaign was properly registered. That’s the fundamental part of our campaign law because by registering you then have to disclose who your funders are. It certainly looks to us that the What’s Upstream managers, Larry Wasserman, employee of the Swinomish tribe, and the folks at Strategies360 violated our state campaign laws by failing to register their grassroots lobbying efforts aimed at passing legislation but also their citizen’s initiative. Documents released as part of our Freedom of Information Act request show that Wasserman in the What’s Upstream workplan submitted to the EPA said that “the ultimate outcome of the project” was to pass a citizen’s initiative. It’s one of the main reasons that EPA staff halted the work on the campaign–a halt that was quite clearly overturned by EPA Administrator McLerran.

Let’s keep up the fight, Mr. Attorney General. We’re eager to see that your enthusiastic enforcement applies to any and all who break our laws.