Dairy farmers ask: Where is the Trump administration’s commitment to transparency in science?

Dairy farmers are appealing to EPA Director Andrew Wheeler to take long-delayed action on conducting a real peer review of the 2012-2013 EPA Yakima Nitrate Report. This follows a similar request submitted by Congressman Dan Newhouse of Yakima on June 26. After months of effort with new Region 10 Administrator Christopher Hladick, farmers have turned to the national leader of the EPA to put the agency’s commitment to transparency in science into action.

“Why they refuse to allow a real peer review is beyond us. What are they so afraid of? We want to know the truth about sources of contamination, even if it points to us. Why don’t they? It doesn’t contribute to transparency or help to rebuild trust in this agency by farmers.”

The press release also reveals that the Washington State farm advocacy group has sent a letter to the Department of Justice seeking an investigation of the Region 10 staff. They allege that the staff, confronted with the lack of required peer review, attempted to cover up this failing by going back and attempting to change the category of the study to a lower level which does not require a substantive science review by outside experts. 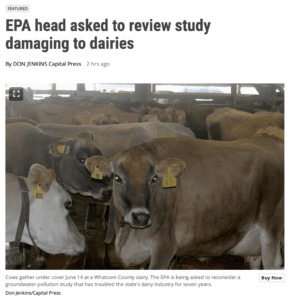