4/4/2016Senator Pat Roberts, (R-Kan) just issued this press statement regarding the billboards that are part of the Whatsupstream political attack on farmers:

“This disturbing billboard is a bold example of exactly what America’s farmers and ranchers complain about all the time: the EPA has an agenda antagonistic to producers. Whether it’s overly burdensome and costly regulations or something as obvious as this this malicious billboard, the EPA has much to answer for in maligning those that grow the food and fiber to feed the world. Our farmers and ranchers are stewards of the land and want to see our natural resources protected as much as any other American.

“While there are legal concerns with the lack of disclosure of EPA’s involvement, the billboard is another example of EPA’s improper practice of encouraging the lobbying of legislators. How and why the EPA has allowed taxpayer dollars to be used to attack any industry, including our vital agriculture producers, demands answers.”

This follows the latest revelation of Capital Press reporter Don Jenkins in this April 1, 2016 (if only this whole thing were an April Fool’s Day joke!) report:

EPA: Anti-Farmer Billboards Violate Agency Rules
​
In the article the EPA admitted that the billboards, busboards and other advertising material are illegal because they did not include the required information that the message was funded by the EPA. Since the EPA stated themselves, and the grant reports showed, intensive review and engagement by the EPA, how could this have happened? How could it have gotten through this intensive review? How is it the lawyer who approved the entire campaign didn’t note that the ad materials were in clear violation of the terms of the agreement? 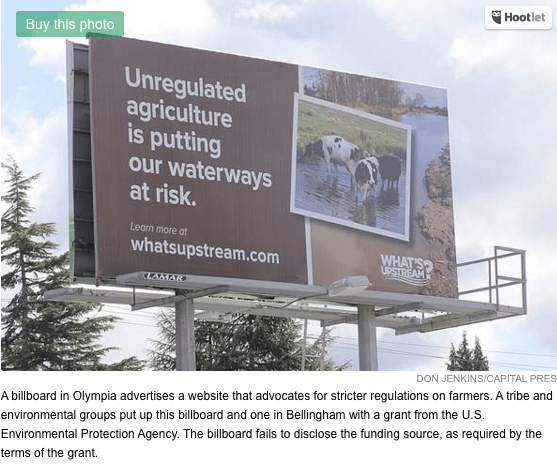