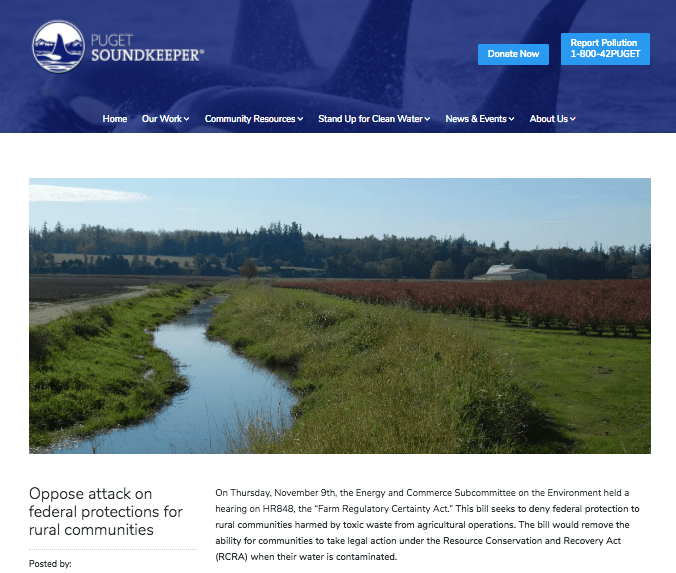 Want to protect farmers and rural communities? Do the opposite of what Puget Soundkeeper asks

Puget Soundkeeper Alliance appeals to environmental supporters to oppose HR848, the Farm Regulatory Certainty Act. What’s really troublesome is that they state their opposition is based on concern for “the rights of rural communities to protect their health and environment.”

The opposite is the truth and here’s why.

This act was introduced because a federal judge in Spokane made a very damaging decision involving dairy farms. The lawyer suing these farms claimed that manure from cows was “waste,” and that by putting this “waste” on fields the farmers were violating a federal law applying to municipal solid waste. That law, the Resource Conservation and Recovery Act, never contemplated cow manure being considered
garbage. In fact, it is not waste as it is an increasingly valuable organic fertilizer used not just by the dairy farmers to grow feed crops for their cows, but more and more by the growing number of organic farmers who need this natural fertilizer. The large increase in organic farming in Washington would be significantly affected by losing this “waste.”

What the Farm Regulatory Certainty Act would do would clarify what should never have needed clarification: animal manure is not garbage. But it also prevents lawyers like those Oregon-based attorneys who sued the Eastern Washington dairy farmers, from using this law as a basis to sue farmers. And this is the real problem that Puget Soundkeeper Alliance has. By opposing this law, they are standing with the lawyers who have said in court that “dairy farmers are killing America,” and who are seeking to put dairy farmers in Washington state out of business. They do not want farmers to have the same legal protections against these kinds of lawsuits as other organizations. The real issue of this bill was well stated by Scott Yager of the National Cattlemen’s Beef Association in a guest editorial in “the Hill”:

The Farm Regulatory Certainty Act would close this dangerous loophole in our enforcement system. Specifically, it would prevent third-party lawsuits if the producer is already subject to an enforcement action or administrative proceeding with a federal or state government.
The legal nonprofit group Public Justice alleges that closing this loophole would deny private citizens and communities their right to take legal action. That is simply not true. Fear mongering is great for whipping up supporters and soliciting donations, but it is hardly a recipe for an effective regulatory system.
Nothing in the bill would remove the citizen lawsuit provision from RCRA. Farms and ranches that flout the law can and should be held accountable. The legislation appropriately protects producers from superfluous litigation when they have agreed to work with federal and state officials to resolve the environmental issue in question.

Given Puget Soundkeeper Alliance’s affinity toward using “citizen lawsuits” as a fundraising tactic, and given the incredibly high legal fees paid by the farmers to the Oregon attorneys who sued them, there is clear motivation for Puget Soundkeeper Alliance to try to keep this bill from passing. But this just shows their interest is in fundraising and lawsuits, not the environment. If the RCRA court decision is used for more lawsuits against farmers it will further contribute to the loss of our family farms. Those same lawyers are pushing regulations that if adopted would destroy almost all our family dairy farms in the state. Perhaps the lawyers accusing these farmers of killing America will take satisfaction in that, but the rural communities, farmers and state economy will certainly not benefit.

Puget Soundkeeper Alliance is just off-base in saying this bill would protect rural communities. Only farm-destroying lawyers and those who raise funds through questionable lawsuits will benefit if this bill fails.