Silvia Lopez is a farm worker from the Gerawan Farm in California, one of the largest fruit growers in the country.

Francisco Cerritos was a longtime employee of the United Farm Workers union, where his job was to be a “submarine” infiltrating farms targeted for union action by UFW leaders.

These farm worker leaders were brought to the meeting in Eastern Washington by Save Family Farming, a Washington farm advocacy group led by farmers of various types across the state.

Silvia Lopez, accompanied by her daughter, son-in-law and grandson, spoke passionately of her effort to lead the 5,000 Gerawan farm workers to vote to decertify the union.

She and her family explained that although workers had voted to have the UFW represent them in the 1990s, after that vote the union disappeared except to take money from their paychecks.

When workers needed help from the union on an issue, they received no response.

She and others became tired of paying the union 3% of their hard earned money for no reason, and on her own time, she talked to others about working together to stop the union abuse.

She explained that after the workers voted the California state labor board, controlled by those affiliated with the union, refused to allow the votes to be counted.

For five years, the state board refused the workers’ voice to be heard, but Silvia refused to give up.

With free legal help from Fresno attorney Anthony Raimondo, the workers went through a number of agency and legal appeals until the California Court of Appeals forced the state to count the votes.

They found that over 90% of the 5000 workers voted to throw the union out. You can read all about this struggle on the pickjustice.com website. 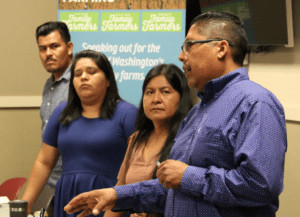 Francisco Cerritos, speaking only in Spanish, told the farm employees about his experience working with the UFW as a union organizer.

He worked for them for over ten years and his passion for helping farm workers is clear.

He explained that he worked as a “submarine” infiltrating farms targeted for union action to persuade workers to support the union or participate as the “victim” in legal action against the farm.

Suing farms for numerous allegations of mistreatment of workers is one tactic UFW is using in Washington to force farmers to sign union contracts.

Cerritos said he discovered that the employees of those farms he was targeting were usually treated better than the UFW was treating its own employees.

He decided to start a union of UFW workers and was fired by the union in retaliation.

He then filed a class action lawsuit on behalf of a number of union employees and won a $1.8 judgment against the union for various forms of wage theft and missed rest breaks – the very same accusations that UFW makes against its target farms.

Except in this case, the court found the accusations true.

UFW ended up settling for $1.3 million.

Now Mr. Cerritos is committed to protecting fellow farm workers from an organization he considers harmful to workers and abusive to their own employees.

Attorney Raimondo commented in the meeting that many workers come from Mexico to work in the US because of the corruption of the worker unions in Mexico called “sindicatos.”

That is also the term workers familiar with UFW refer to the California union as well.