What They Got Wrong

You care about the environment and water quality. So do farmers. But you also care about the truth.
If what whatsupstream and its sponsors say in their site is true then big changes have to be made.
​And maybe there’s no room for farming in Washington state.
But, it’s not true.

Objection 1: Farmers don’t cause salmon to spawn and die.

The website opens to a farmer spraying his field, dirty water entering clean and a dead fish. Obviously a salmon and obviously a spawned out one. Why this juxtaposition? The intent seems to build outrage from the start. We wouldn’t call this lying, just setting the stage.

The frequent references in this website and in the attacks on dairy farming from Western Environmental Law Center say dairy farmers are not regulated. Not true. The 1998 Dairy Nutrient Management Act is one of the strongest sets of regulations in the nation. It requires all dairy farms to submit farm plans that control proper application of manure nutrients. It stipulates zero discharge. The good news is that these regulations are working. Water quality testing compiled by Ecology shows a dramatic reduction in fecal coliform following the implementation of this law.

The Washington State Department of Agriculture enforced the Dairy Nutrient Management Act. Between 2007 and 2015 they conducted nearly 3000 inspections of the state’s approximately 1600 dairy farms. 22% of those inspections resulted in some form of compliance action. The good news is that 85% of dairy farms had no discharges. But it’s also good news that those that have had discharges, record keeping issues or other compliance problems have received penalties. We have regulations, we have enforcement and along with proactive efforts above and beyond regulations, these are working to improve and protect our water.

Whatsupstream and Western Environmental Law Center (the source of this claim) are using old data to attack dairy farms. The truth is, in the mid-1990s when Lummi shellfish beds were closed, dairy farms were seen as the primary cause. The 1998 Dairy Nutrient Management Act changed that. Strict regulations with enforcement plus positive, responsible action by farmers completely changed the picture. The Washington State Department of Health in 2012 presented a chart showing shellfish beds impacted by pollution. Very few are in areas of dairy farms and certainly not those most polluted. The Health Department stated “In the early 1980s, nonpoint fecal pollution became the key factor in closure of shellfish beds.Intensive development of rural watersheds and the marine shoreline of Puget Sound have increasedthe risk of contamination of shellfish resources.” See page 19 of this Fact Sheet. It’s ironic that the whatsupstream sponsors want to drive farmers out of business knowing that urban sprawl will quickly fill in our farmland, causing the very problems they say they are trying to fix.

The site raises fears about nitrates, stating they are “acute contaminants.” Nitrates are found in all kinds of foods and the highest levels are in leafy vegetables. Nutritionists all agree: these nitrates are good for you. Athletes take nitrate-heavy foods to boost their stamina. But what about nitrates in drinking water? The EPA has set a very strict limit of 10 parts per million. The primary reason was that research going back to the late 1940s linked high nitrates in drinking water with methemo-goblinemia or blue baby syndrome. The problem is, almost all studies, even those done by the EPA, show that this research was faulty because it did not consider the high bacteria count in the well water and that nearly all case of blue baby syndrome occur outside farm areas. Genetics and bacteria are now considered the primary causes of this disease. The EPA has listed nitrates and nitrites as substances up for review. Numerous scientific papers, including those published on the National Institutes of Health website, make it clear that current studies no longer justify the strict nitrate standards in drinking water.

Whatsupstream repeats the accusations of Western Environmental Law Center about manure lagoons. Most dairy lagoons are lined. The US Department of Agriculture specifies the soil or clay lining which, in conjunction with the cured manure, results in very little manure leaking from lagoons. What does leak does not necessarily mean pollution because of the biological process beneath the lagoon called denitrification. Soil tests and science studies make clear that these claims of pollution from lagoons are off base. The truth is manure lagoons are an essential part of protecting our water. Proper lagoons allow the manure nutrients to be safely stored until they can be applied at the right time and under the right conditions.

Most dairy farms in Washington state are relatively small family operations. In Whatcom County, one of the largest dairy areas, the average herd size is about 450 cows–many are 200 cows or less. The EPA does not define these operations as CAFOs (Concentrated Animal Feeding Operations) unless they are known significant polluters. Leave aside the issue of “name calling,” the fact is the Farm Plans required by the Dairy Nutrient Management Act require proper application of manure nutrients. Called “agronomic,” it simply means farmers can apply organic nutrients (manure) only when the plants can take up the nitrogen and when weather conditions minimize risk of runoff. Before current regulations, manure was spread on fields when convenient for farmers and no doubt there was over application that is seen in historic studies. That’s no longer the case. It’s unfortunate to use out-of-date information to false accuse farmers of pollution.

Objection 8: What does the survey really say? 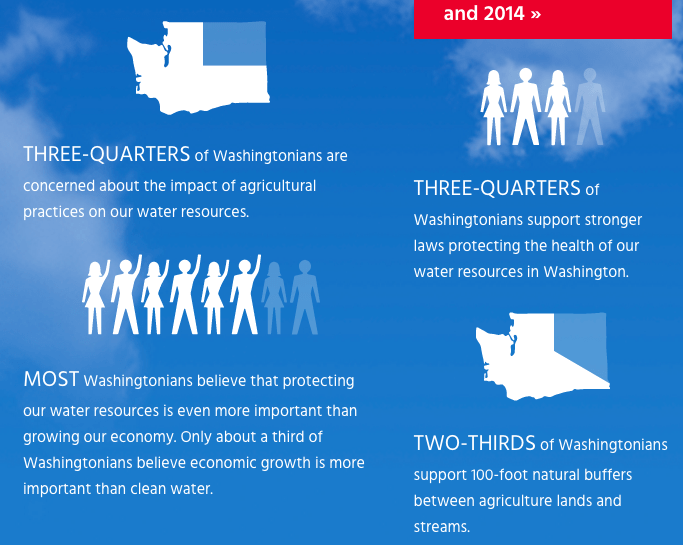 The clear effort here is to show according to a survey conducted by one of the site sponsors that Washington citizens are behind the effort of the site sponsors to really crack down on farmers. Look at the claims made about what the survey says. Now, please look at the two survey reports which they helpfully publish. (2012 Survey 2014 Survey)

You will find a pretty remarkable variance between what the surveys show and what the sponsors say they show. For example, it shows that of all the potential sources of water pollution farm practices were of least concern to Washington citizens. It also showed that farmers and ranchers are held in very high esteem by Washington citizens, higher than any other group or politician named.

Farmers agree that protecting our water resources is extremely important. It is quite certain that no group or entity impacted water quality over the years has worked harder or made more improvements. Pushing farmers out of business will not help the environment or water quality–and the survey suggests that most Washington citizens understand and agree with that.

Objection 9: Buffers are important and we have them.

Whatsupstream seems focused on requiring 100 foot buffers. The picture of cows standing in a stream is designed to show the need for it. In reality, if a farmer allows his or her cattle to wade into streams, they have a serious regulatory problem. More than that, if they don’t use protective buffers which minimize manure runoff into streams, they are also in trouble. The best science, conducted by the US Department of Agriculture’s Natural Resources Conservation Service (NRCS) and administered through the county Conservation Districts, determines appropriate buffers to use. A one size fits all makes no scientific or economic sense. Farmers work cooperatively with their local Conservation District to continually update and improve their understanding of appropriate buffers.

Objection 10: You’re a taxpayer. Are you happy you are paying for this?

Maybe you agree with whatsupstream, or like us, you are concerned that this attack on Washington family farmers is less than straightforward, factual and trustworthy. If you are concerned about the validity of these attacks, you will be outraged as we are that our tax dollars are being spent in this way. You should be aware that the Office of Inspector General noted in a report of July 2014 noted that EPA Region 10 had some significant issues of oversight of the subaward of grants.

We strongly urge you to send a message to your United State Senators and Congressional representatives. Let them know that you do not consider this an appropriate use of your tax dollars. We’re providing a list of our federal representatives on this website.

Hear from Your Family Farmers 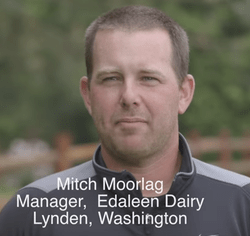 Mitch Moorlag, General Manager of Edaleen Dairy, one of the larger producer-processors from Whatcom County. Son-in-law of the farm’s founder-owners, he explains how their farm has received enforcement actions for pollution but how they responded. His message: Farmers care. 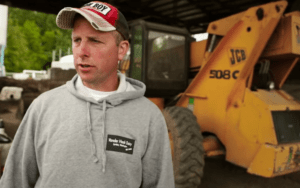 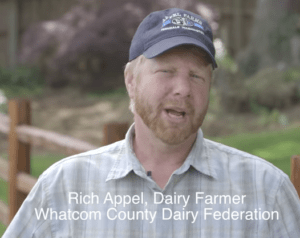 Rich Appel, second generation dairy farmer and farm leader. The farm milks 500 cows, converting much of their milk into Appel Farmstead Cheese, a popular brand available in quality food stores across the nation. 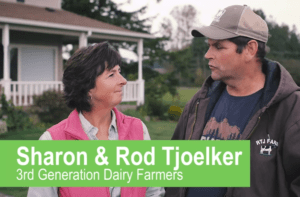 Third generation dairy farmers Rod and Sharon Tjoelker explain why the pressures from potential new regulations and threats from lawyers are forcing them to consider selling out. 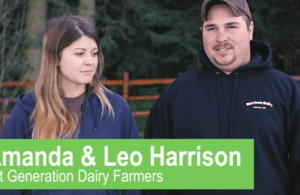 Leo and Amanda Harrison, one of just a few young farmers trying to start a farm under the threat of lawsuits and drastic new regulations. Can they make it?

(Sad update: In Febuary 2016, the Harrison’s sold their cows and called it quits.) 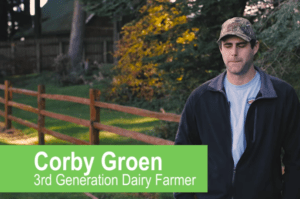 Corby Groen and his wife hope their young daughter will be able to be raised on the farm and perhaps succeed them. Pressures on farming make that uncertain.