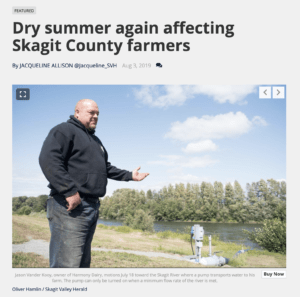 Jason VanderKooy is a family dairy farmer in Skagit County and a farm leader. He’s a Dike District commissioner and the leader of Skagit Family Farmers, an affiliate of Save Family Farming. In this August 3 Skagit Valley Herald report, he highlights the problem farmers in the lower Skagit river delta are having with water access for necessary irrigation. There is more to the story, however. The in stream flow levels set by Ecology are there to protect fish. However, the irrigation water these farmers need has no impact on fish for several reasons. First, the pump that draws water from the Skagit is very near where the large river flows into salt water. River levels just below the pump are affected by the tides. Second, the amount of water needed is a very small percentage of the flow of the river. Even at times of low flow, the minimal amount taken would have no impact on fish particularly given its location near the mouth of the river. Third, the amount of water flowing in the river is controlled not by nature but by humans. Upriver the dams owned by Puget Sound Energy and Seattle City Light control the flow in the river. Farmers note that the flow is often increased to time with tribal fishing seasons to signal the fish waiting in the salt water that it is time to enter the river. This maximizes the tribal catch. If those controlling the flow of the river can and will do this for tribal fishers, is it reasonable to ask why they would also not increase flow to allow the farmers to grow their crops? Farmers have calculated that the amount of water released to support tribal fishing in just two releases is twenty times greater than all the irrigation water the farmers need for the entire growing season!

The point that the public needs to understand is that the water flow issues in the Skagit are not about protecting fish. Politics has overcome good sense and real science.