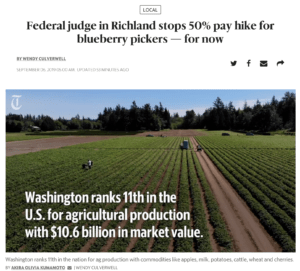 The Tri-City Herald reported September 6 that a federal judge in Richland temporarily blocked the government from a 50% increase in piece rate pay for farm workers. This means these workers can continue to earn the $17 per hour they receive in the blueberry harvest in Eastern Washington. If the huge pay increase had been allowed to go on, hundreds of farm workers would lose their jobs as the farms would convert to mechanical harvesting instead of hand harvesting. As the attorney for Zirkle farms stated the result would be a big payday for mechanical harvester salesmen but bad news for the workers they would replace.

We note with interest that the lawyer for the government argued against the injunction by saying the farm’s profits or losses should not be a consideration. The judge’s response was more than appropriate: “Is Zirkle in this as a hobby?” Apparently this lawyer and the federal officials he represents do not understand that if a farm cannot sell its products for more than what it costs to produce them, it will not be there to hire more workers. It’s a bit hard to understand how such a simple fact of life can escape what we would presume to be reasonably intelligent people.

Most of the affected workers are guest workers, among the 30,000 mostly Mexican seasonal workers given legal visas to work on farms. Mexican minimum wage is 79 cents per hour which, considering comparable costs, comes to less than $2 per hour in US dollar terms. These workers can earn in a few months what would take years to earn in Mexico, which is why so many opt for these jobs. Minimum wage for guest workers in Washington state this year was over $15 per hour, the highest in the nation. This wage is set by the federal Department of Labor which also requires the farms provide free transportation, free housing in government approved facilities, subsidized food and other benefits.

The rapidly rising labor costs in the US compared to foreign farms is causing a rapid rise in imported food, particularly fresh fruit like blueberries, strawberries and raspberries. This means Washington farmers must mechanize or go out of business when they can no longer compete. Either way, farm workers are the ones hurt most by the huge disparity in labor costs.

If you want to help farm workers maintain the ability to provide for their families back home, get all the facts here.