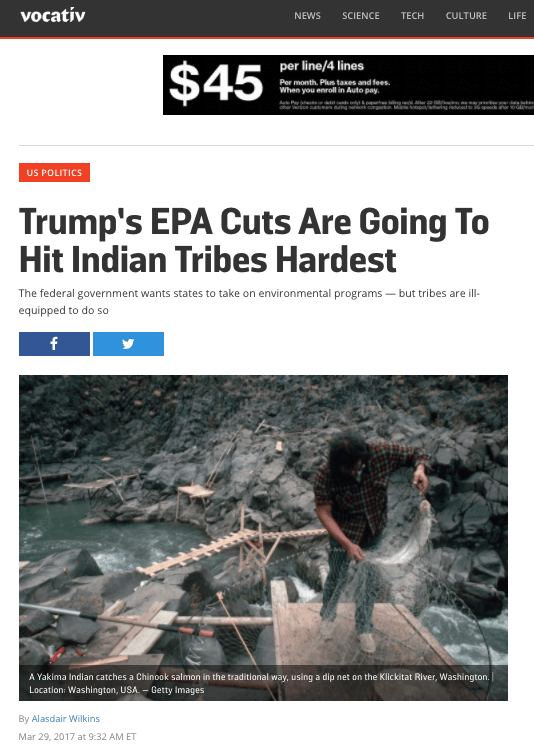 Vocativ is one of those hip, new online news sites. Like most news media these days, they are reporting on the proposed EPA cuts in the most alarming terms. This one deals specifically with the EPA grants made to the Northwest Indian Fisheries Commission.

These tribes received $18 million in National Estuary Program funding in 2010 and another $25 million in 2016. $655,000 of those funds were used or intended to be used to run a vicious political attack on farmers aimed at passing laws and building public outrage through false accusations. But, that’s just part of the story. In defending his action against legal challenges, the EPA administrator claimed his staff told him he had no control over how the money was spent.

Hello Alasdair Wilkins who wrote the story for Vocativ: Did you bother to find out exactly how that money was spent? Could you have asked why the EPA is funneling this money to this group instead of the project set up by the state to coordinate all Puget Sound restoration efforts? Did you ask what we got for that money? Did you ask if the money was misspent as many Congressional leaders have said, why was the ante upped and more given? Did you notice that the Office of Inspector General not only criticized how these grants were used before but now is investigating Congressional accusations of violations of federal law?

It is just possible that should the budget assigned to this boondoggle be cut for the NWIFC, there will be no impact on the environment because we have not been able to identify one positive impact for the environment from the money already spent.

Here’s what Vocativ says about itself on its website:
Vocativ is at the nexus of media and technology. We use deep web technology as a force for good and go where others can’t to reveal hidden voices, emerging trends and surprising data. We turn exclusive insights into visual stories that offer our audience new perspectives and connect us more deeply to a changing world.