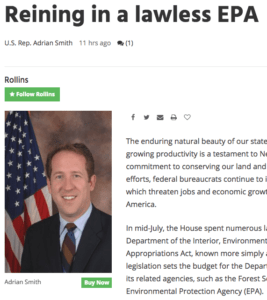 The Interior bill provides funding for the EPA, the Department of Interior and related agencies. This bill passed the House and reduces the funding the president requested to these agencies by $1 billion.

The guest editorial by Nebraska Congressman Adrian Smith links this funding reduction to EPA’s lawlessness and states: this bill seeks to stop the assault on America’s farmers and ranchers.

We note this is the same language used by Senators Inhofe and Roberts when discussing EPA’s role in funding the illegal lobbying campaign called “What’s Upstream.” We have every reason to believe that the outcry from farmers over this false, malicious attack on farmers, funded, “appreciated,” and apparently supported by the EPA Region 10 officials, has contributed to the passage of this bill.
There is an important lesson here: we must continue to make our elected representatives, Democrat and Republican alike, of our serious concern — even outrage — over this anti-farm activity of EPA.