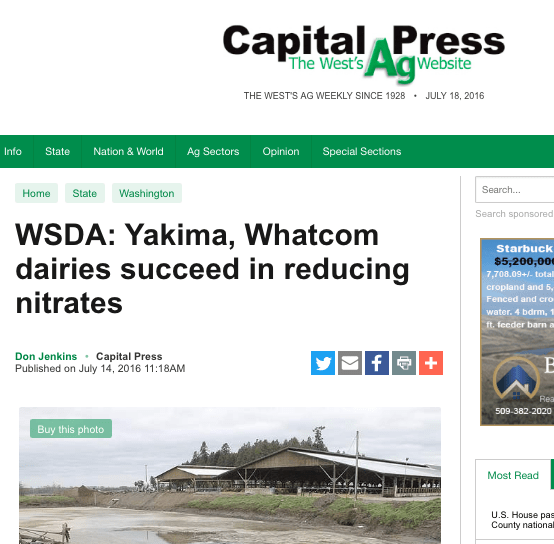 Farmers across the state were very upset by the “What’s Upstream” attack, including the billboards that said “Unregulated agriculture is putting our waterways at risk.”

This news story from the Washington State Department of Agriculture and reported in Capital Press shows why the false attack made farmers so angry. Dairy farmers have been heavily regulated since the 1998 passage of the Dairy Nutrient Management Act. In addition to supporting enforcement funding in the legislature, many dairy farmers have gone beyond the regulations to help protect and improve water. The latest data shows it is working, and farmers are showing more commitment than ever to improve.

The chart below shows the improvement in nutrient management as seen in the number of acres “needing attention.” Those needing attention are identified as having higher than 45 parts per million of nitrates.

You may also note the decrease in dairy acreage over two years — that is what so concerns farmers and farm supporters.

The use of taxpayer funding through the EPA to spread the lies, distortions and misinformation of the What’s Upstream attack is hurting farmers. Pressure from out-of-state lawyers threatening lawsuits and pressuring for ever more unnecessary and expensive regulations are hurting farmers as well.

In the meantime, as the Department of Agriculture information shows, farmers continue to work hard to do farming right.