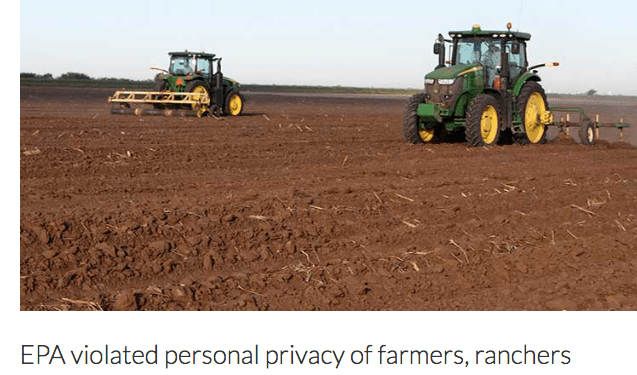 No, this isn’t about “What’s Upstream” and the federal and state laws we believe the EPA violated in funding the anti-farm lobbying campaign.

But this story from the Texas Farm Bureau is sounding familiar, which reports:
The ruling in American Farm Bureau Federation (AFBF) and National Pork Producers Council vs. EPA concerned the federal agency’s 2013 release to three environmental groups of a vast compilation of spreadsheets containing personal information about farmers and ranchers who raise livestock and poultry in 29 states. The case also related to similar personal information from farmers and ranchers in seven additional states that had yet to be released.
The Eighth Circuit Court unanimous decision against the EPA stated:

According to the court, “EPA’s release of the complete set of data on a silver platter, so to speak, basically hands to the requestors a comprehensive database of their own, whatever their motives might be.”

Anti-farm activists are complaining a lot about “lack of transparency” in protecting farmers’ business and private information. But they lack transparency in making clear that their interest is in suing farmers. EPA has shown itself to be far more friendly to those who want to sue (and distort the facts ala Whats Upstream) than to those who want to grow our food in an environmentally friendly way.