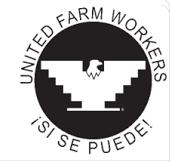 Farm workers in California have discovered that United Farm Workers (UFW) today is a far cry from the days of founder Cesar Chavez. The overwhelming rejection by farm workers including those who were in the union for many years sends a strong message to today’s farm workers: these people are no friend of farm employees. Today less than one percent of California farm workers are represented by the union. And for very good reason. Go to pickjustice.com and see the thousands of farm employees protesting AGAINST United Farm Workers. Workers at one large farm that were represented by UFW voted 10 to 1 to decertify despite years of effort by the California state labor agency to protect the union against the workers.

Not only farm workers have rejected the union, the unions OWN employees found it necessary to form a union of UFW employees! And then found themselves subjected to harassment and retaliation –– the same charges UFW leaders level falsely against their employer targets.