It’s one of several methods being actively discussed to help the starving orcas and improve chinook recovery.

Farmers want the best science to guide our policy makers. Too often, emotional issues like orcas starving and fish decline are consumed by political considerations rather than what really works. The Washington Policy Center does a good job of evaluating some popular options.

What will save orcas and chinook? 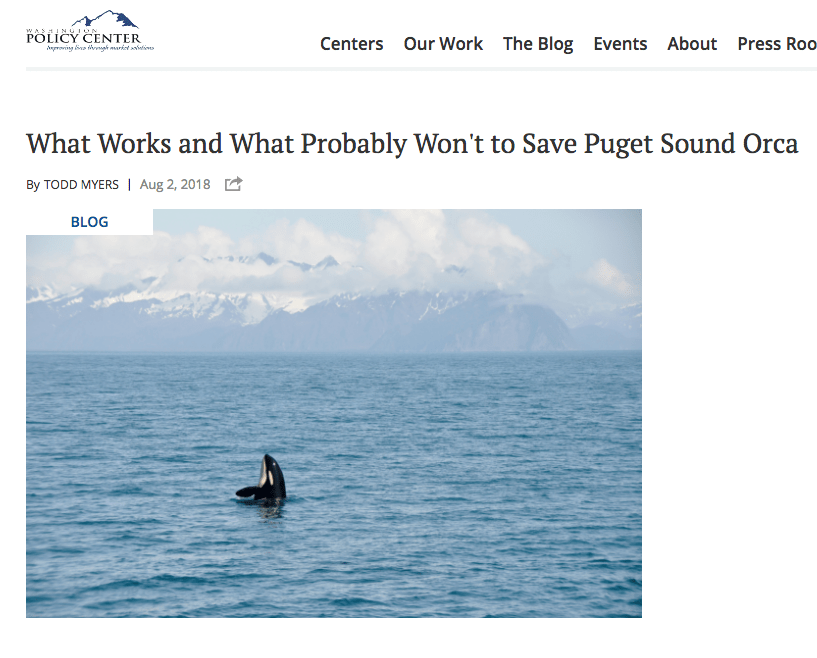 CBC report quotes a Seattle toxicologist who has found anti-depressant medication in salmon smolts. Is this affecting predation and loss of chinook and orcas?

The Washington Policy Center’s environmental director, Todd Myer, takes a hard look at some of the solutions swirling around on orca and chinook recovery.

Removing dams is a “symbolic” solution that will not affect fish recovery because smolt loss through dams has been largely eliminated.

Removing predators is an essential part of any strategy. Myers bases comments on a Canadian study that talks about the increase in harbor seals. He supports the effort to modify the Marine Mammal Protection Act. We believe the US study that identified the unique problem of harbor seals in northern Puget Sound, aka the Salish Sea, requires modification of the sea lion legislation.

Increasing hatchery production. We agree that this could help but are cautioned by the suggestion in the science study that shows hatchery production (and wild stock production) have increased to almost double in the past forty years, but this has led to an increase in predators that caused the decline of chinook. If so, will creating more smolts help or just breed more predators?

Restricting fishing. Various studies show that restricting fishing is not the issue. There may be a temporary reprieve but only by addressing the more fundamental issue of out-of-control predation can the problem be solved. Harvest does need to be considered but first we should get assurance that applicable laws and regulations aimed at controlling harvest and protecting the stock are followed by everyone.
​