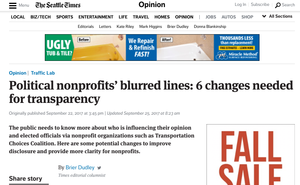 On September 22 Seattle Times columnist Brier Dudley wrote about the Transportation Choices Coalition and its lobbying activities. He recommends several things the state should do to increase transparency including broadening the definition of lobbying.

Policy lobbying. The definition of traditional lobbying needs to be broadened in Washington. It currently applies primarily to directly influencing specific legislation, such as a bill in the Legislature. But lobbyists also influence policy before it becomes legislation and after, when it is implemented.

Exactly. The What’s Upstream campaign was an overt lobbying campaign, designed from the beginning to pass legislation, regulations or a citizen’s initiative. Even the organizing activity including signature gathering for a planned citizen’s initiative was included in the plan and later dropped. All this lobbying was done with taxpayer money using an environmental grant from the EPA to the Northwest Indian Fisheries Commission. The tribal employee who ran the campaign defended himself from prosecution of state campaign law violations by saying he was immune from state laws. The Office of Inspector General determined that the campaign was a Washington State lobbying campaign, but since it didn’t involve specific federal legislation it didn’t break federal campaign rules. But our Public Disclosure Commission and Attorney General Bob Ferguson’s office refused to enforce the law on the flimsiest of grounds, but including the statement the nearly $500,000 (taxpayer funded) campaign didn’t reference a specific bill so wasn’t really lobbying. This despite the fact that the same tribal official had gotten a bill introduced to do what the campaign was aimed at.

We agree with Brier Dudley, something must be done. We do think that the law is pretty clear that this violated state campaign laws but for political reasons (look at the AG’s campaign contributions) the AG decided not to enforce, even while running his political campaign on vigorous campaign law enforcement actions. If it is not clear enough to prevent this kind of abuse, it needs to be changed. While we are at it, we need to address this issue of tribal compliance with our campaign laws. As it stands, according to the EPA, once they give a tribe taxpayer money they have no control over it and according to the PDC and the Attorney General, tribes can use that taxpayer money for political purposes without accountability, transparency or legal consequences.