​WHATCOM ­— Dairy farmers are encouraged by the ruling that was handed down by a state appeals board Friday on the permit that regulates the use of manure containment lagoons.
“We are overall pleased with the ruling as it confirms the dairy community’s position that current laws and regulations are protective of the environment,” said Larry Stap, fourth-generation dairy farmer from Lynden and president of statewide farm advocacy group Save Family Farming. “We believe there are some errors of fact particularly relating to rulings about when it is safe to apply manure, but the critical issues of lagoon liners, additional surface and groundwater monitoring, and other demands made by those appealing have all been satisfactorily resolved.”

The Pollution Control Hearing Board issued its decision on the Concentrated Animal Feeding Operation (CAFO) permit that went into effect in spring 2017 after about a year in development by the state Department of Ecology.

Environmental groups that appealed say the decision means farms will be allowed to continue to pollute groundwater.
But Save Family Farming doesn’t see it that way at all.

Overall, the board concluded that the permit taken as a whole complies with the federal Clean Water Act and Washington state water pollution control laws and is protective of water quality, the hearing agency said in its own announcement. The board affirmed the provisions of the permit including implementing a lagoon assessment, with a specific caveat — that the measurement of the two-foot vertical separation from the water table should begin at the top of the liner of the lagoon. The board has remanded the permit to Ecology to revise the two conditions associated with this point of measure so as to be consistent with this decision.

Farmers were most concerned about the effort of the Puget Soundkeeper Alliance to have Ecology require double synthetic liners in manure storage lagoons, said Save Family Farming executive director Gerald Baron. Dairy farmers through the Washington State Dairy Federation maintain that current lagoons built to federal Natural Resources Conservation Service standards are protective of water, and the hearing board agreed with the testimony of the expert from NRCS, Baron said. A hearing was held in Olympia in late May and early June. The change Ecology made to the way current lagoons are measured came late in the CAFO process, and it would have resulted in a large number of lagoons that conform to NRCS standards needing to do expensive retrofitting, Baron said.

If Ecology had been allowed through the ruling to mandate double synthetic lagoon liners on farms, it would have resulted in the loss of most of the remaining dairy farms in the state, about 375, according to a 2015 farmer survey. This is additional PCHB summary of its decision: did not present sufficient evidence to convince the board that surface water monitoring and groundwater monitoring should be required in the permits. The board affirms the provisions of the permits that provide for soil sampling and adaptive management of land application fields depending upon nitrate levels revealed by the sampling. The board concludes that the emergency land application allowed by the permits avoids a worse alternative outcome from the overtopping of a lagoon and is sufficiently limited by the remaining permit terms.”

The Dairy Federation maintained that new surface and groundwater monitoring would not provide any new meaningful information to guide farm practices that was not already gained by existing regulations through soil sampling. Dairy farmers remain concerned about having to use a standard measurement for when early nutrient application can occur. Called T Sum 200, it is based on temperature over time. But the measurement was developed for use in wetter coastal climates and does not equally apply to eastern Washington farmers, they argue.
Bellingham-based ReSources for Sustainable Communities was also in the consortium of appealing groups.

This was a reaction statement of Ander Russell, its Clean Water Program manager:
“As Washington farms grow and modernize, measures that protect neighbors’ rights to clean water must grow along with them. Farming is an important part of Whatcom County’s heritage and economy. And water is a resource we must all share and protect. Like any other valued industry, agriculture’s profitability cannot come at the cost of clean water for the rest of the county.”

​But Jason VanderKooy, Skagit County dairy farmer and Save Family Farming board member, said, “Now is the time for these environmental groups, particularly the Puget Soundkeeper Alliance, to come to the table, sit down with farmers and begin to work together.” 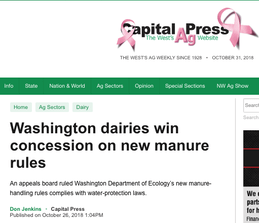 Washington dairies scored a victory Thursday as an appeals panel told the Department of Ecology to revise its new manure-storage regulations to conform with Natural Resources Conservation Service standards for lagoons.
The ruling is particularly important for Western Washington dairies, which faced the prospect of having to lift NRCS-approved lagoon bottoms farther from groundwater. The Pollution Control Hearings Board ruled that Ecology failed to justify modifications that would have cost hundreds of thousands of dollars per lagoon.
“That would have been a killer for a lot of lagoons in Western Washington,” said Dan Wood, executive director of the Washington State Dairy Federation. “I’m happy for the decision that NRCS standards need to be followed on lagoon liners.”