Will the current solutions bring back the chinook and help orcas survive?

The mournful sight this summer of a mother orca carrying her dead baby captivated Western Washington residents and far beyond. It often takes events like these to galvanize public opinion and spur government leaders to take action. There is no question that urgent action is needed to prevent further loss of our Southern Resident killer whales and that means that we need to ensure that they have plenty of mature chinook salmon to feed on.

The primary solution to this very real problem has taken the form of dogma. But such fixed beliefs can prove to be counterproductive when new evidence emerges that doesn’t fit with the established narrative. That is what appears to be happening here.
A recent commentary by the head of one of the largest environmental organizations in the region repeated the common list of solutions:

Some others go beyond this and call for the removal of Snake river dams. Along with these solutions there is the call for more public investment, more lawsuits, more reductions in farmland to provide for more fish habitat. Washington taxpayers have already invested billions into habitat restoration and the pace is quickening. There are likely multiple thousands of public, tribal and non-profit employees whose livelihood depends on this focus on habitat restoration as the primary solution to declining chinook harvests and protecting orcas.

This habitat dogma, if we may call it that, is not supported by the latest science. First, much to the surprise of most readers, current studies show that all Pacific salmon species except for chinook are at record numbers. The production of chinook smolts, both wild and hatchery, has nearly doubled in the forty years according to an important study led by BE Chasco of NOAA published in November 2017. For the first forty years of the study period, beginning in 1975, chinook production increased significantly due mostly to hatcheries. But in the past twenty years, the decline in hatchery production has been more than compensated for by an increase in wild chinook production. Still, harvest levels continue to decline. What is going on here? The massive public investment in habitat appears to be paying off, but where are the fish?

The answer, according to the fourteen scientists who authored the study, is predation. The public has become more aware and slowly more adjusted to the idea that predation by sea lions in the Columbia river must be addressed. Congress is taking action on that. But, the Columbia river sea lions consume just 194,000 salmon and Salish Sea harbor seals alone consume 23 million chinook. The problem of declining chinook stocks and starving orcas is specific to the Salish Sea. Populations of killer whales have more than doubled from northern California to Alaska. All populations are thriving except for our Southern Resident killer whales.

Transient killer whales eat harbor seals, but resident killer whales, including our residents, don’t. The result is an explosion in the population of protected harbor seals in the Salish Sea alone. The scientists from NOAA, academia and other fisheries agencies stated:

We now know why nearly doubling the production of chinook smolts is not resulting in more chinook harvested and why the Southern Resident killer whales are in supreme danger. If their diet included harbor seals, or more transient killer whales visited, the harbor seal population would be more controlled. But, without something being done about the harbor seals in the Salish Sea, it appears certain that increased smolt production through cleaner water, better habitat, more regulations on farming, more taxpayer investment will not result in saving the orcas. In fact, in careful scientific language, the scientists suggest that increased production, such as from more hatchery fish (or habitat), could actually harm recovery:

“…it is possible that hatchery origin salmon provide a subsidy for marine mammals, leading to numerical response in these predators and ultimately and increase in predation rates on wild fish.”

Those embedded in a widely adopted narrative, particularly if their jobs and futures depend on it, often do not receive contrary evidence kindly. That is almost certain to be the case with those deeply dependent on more donations to non-profits, more public investment, more regulations, more litigation and more habitat. But as this information becomes available to those who care most about chinook recovery, the dogmatists will have to come to grips with the facts. This is a Galileo moment for the common belief about salmon recovery. How long will it take for real solutions to be adopted?[/vc_column_text][/vc_column]

What Crosscut gets right and wrong about chinook recovery 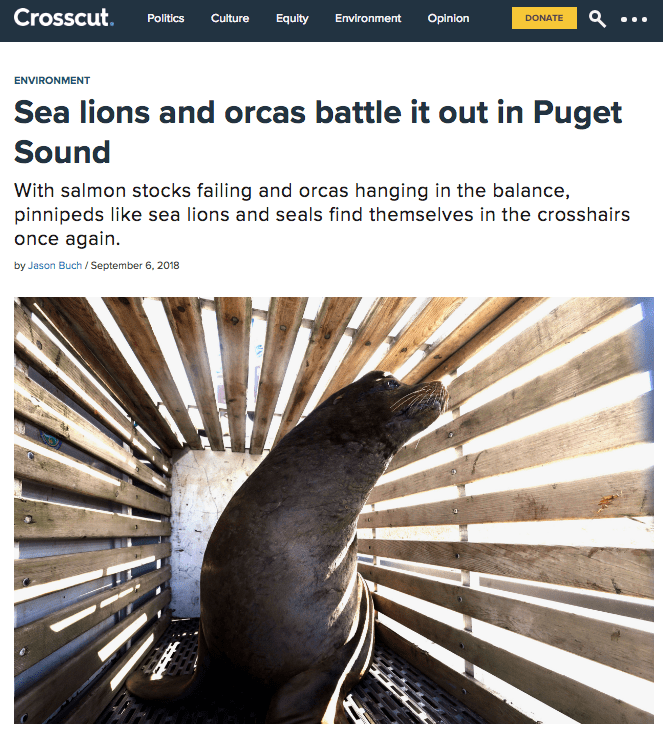 The September 6 story in Crosscut gives some encouragement for those serious about orca and chinook recovery. It suggests that finally there is at least some attention being paid to the foundational problem of pinnipeds. In our Salish Sea, we now know that no other solution will have any real impact unless the unique problem of harbor seals in this area is addressed.

Meanwhile, proposals to kill off harbor seals in Puget Sound that failed to gain traction in the past are now being taken more seriously. One of three breakout sessions during the Aug. 28 meeting of Gov. Jay Inslee’s task force to save the dwindling southern resident killer whales focused exclusively on proposals to reduce salmon predation by pinnipeds, which compete for food with fish-eating orca pods. The widely reported death of a southern resident calf, and the subsequent two weeks of grieving by its mother, has increased urgency to take drastic steps to save the southern residents. Killing pinnipeds, however, remains controversial.

Even more encouraging, Busch and presumably others are taking the latest science about the massive numbers of chinook taken by harbor seals in the Salish Sea seriously:

Harbor seals feed more often on juvenile salmon than adults, and studies have found they eat more individual fish than any other predator. Orcas consume the most salmon biomass — they eat fewer individual salmon, but the fish they eat are older and larger.

What is not so encouraging is continuing evidence that some, with deep investment in the dogma of habitat, continue to deny the readily available science:

Killing sea lions is an attempt at a quick fix that avoids more difficult discussions around dam removal or reducing human catch limits, said Robb Krehbiel, the Northwest representative for Defenders of Wildlife. There’s not enough evidence that killing pinnipeds has an impact on salmon populations, Krehbiel said.

We ask Mr. Krehbiel: have you studied the NOAA report? If that is not sufficient evidence for you, what will it take?

​This is a Galileo moment for the common belief about salmon recovery.

How long will it take for real solutions to be adopted?