Below is an article from Skagitonians to Preserve Farmland. The original can be found here.

For a number of Skagit Valley farmers the effect of an ever-increasing North Cascades elk herd has been tantamount to feeding elk at the expense of their own livelihood. When elk become resident in agricultural lands they cause damage the Skagit County Assessor has estimated at $1.4 million annually.

Elk damage crops because elk will eat almost anything. The Washington Department of Fish and Wildlife (WDFW), stated in its September 2018 North Cascades Elk Herd Management Plan that this herd has damaged “commercial apple orchards, vineyards, pasture, hay crops, green chop, feed corn, silage, blueberries and tree farms.” To that list can be added those large white tarpaulin-covered silage bundles: elk rip them open, nibble some and leave the rest exposed. The silage rots and the feed lost.

Elk graze on pastures meant to feed domesticated livestock. That not only reduces the feed available but also damages the field. Elk will migrate into a field in early spring when the ground is still very wet. By tearing up the wet ground with their hooves, new grass growth and subsequent yield is devastated. Many farmers have been forced to buy feed to care for their own livestock. This expense just doesn’t occur except for the elk.

The North Cascades elk herd (NCEH) has grown significantly over the past several years. With the larger population came an ever-greater increase in damage. That damage includes trampled fencing, a kind of destruction that goes one step further by exposing a landowner to liability if his livestock escape. Even salmon habitat restoration projects in the Skagit River watershed have been complicated by the abundance of elk as they pull some young tree seedlings and stunt the growth of others. The number of elk/vehicle accidents on area motorways has also increased; WSDOT reported 28 elk/vehicle collisions along SR20 in 2019 alone.

Elk are generally thought to migrate to higher elevation in summer months and head toward valley floors when winter comes. This is certainly true for Rocky Mountain elk where herds as large as 200,000 in the Greater Yellowstone Ecosystem follow the longest migration in the continental U.S. every spring and fall. The North Cascades elk herd, however, is comprised of two native species, the Rocky Mountain elk and the Roosevelt elk. The latter is not prone to migration and is known to keep to a select home range. The recognized interbreeding of the two species could offer some explanation as to why the elk are such a problem to agriculture: elk are survivors and they adapt. In Skagit County they’ve adapted to good forage, easily taken, on agricultural land.

Despite its range of 4,650 square miles running from the Canadian border to Highway 2, the North Cascades elk herd congregates primarily in two areas: near the south fork of the Nooksack River and between Sedro Woolley and Marblemount in Skagit County. The county surveyed the latter region in 2018 and found fence and crop damage were the top issues raised by the 140 respondents as they reported elk damage over a combined 5,182 acres of farmland.

It isn’t the elk themselves; it’s their numbers

Although they admit they cannot verify the numbers, the WDFW has prefaced it’s North Cascades elk herd population target on the estimated population in 1984, a range of 1400 to 2000 elk. Due to a number of factors, the herd was thought to contain only a few hundred individuals by the late 90s. In response to the decline, efforts were put in place to increase both the size and sustainability of the herd. Hunting was prohibited over a number of years, elk were transported from the Mount Saint Helens herd, collared and introduced into the NCEH and a number of interested parties joined forces to facilitate herd growth. WDFW’s population objective for the NCEH today is 1700 to 2000 elk. 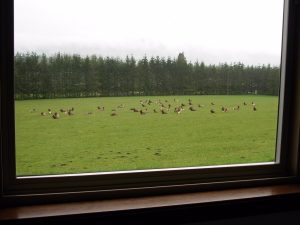 Area farmers will tell you they’ve hit that target and then some.

If, however, WDFW’s estimates are as low as the increased damage would suggest, the growth in population is out-pacing the harvest to a critical and unsustainable degree.

Who gets to decide?

The WDFW co-manages the herd with nine area tribes, often referred to as the Point Elliott Treaty Tribes. Even if the WDFW were amenable to harvesting enough of the herd to reduce pressure on agricultural lands, they cannot act without the consent of the tribes.

For the tribes, a healthy elk herd is the priority. Elk are an integral part of their culture, their history and even their identity. As Shawn Yanity of the Stillaguamish tribe has said, “So many parts of that animal sustains our culture…they’re in our stories, they’re in our songs, they are part of our ceremonies. Not being able to have elk for a funeral or a naming…is like asking the Catholics not to have wine or bread in communion.”

Can anything be done?

In a word, yes. It’s a work in progress, but farmers have been heard and efforts are being made to mitigate damage and even prevent it in the first place. Is it enough? No, not yet, but it’s a start.

To get a count everyone can believe in, a new survey protocol has been implemented. In years past it was a just helicopter survey, despite its limitations in a forested region. Now helicopter and driving surveys are covering both traditional areas and previously unsurveyed areas.

Cooperative fencing projects have been implemented. From December 2015 to September 2017, WDFW, the Tribes and stakeholders provided 31 landowners with 85,794 linear feet of fencing materials. An additional 3,150 linear feet was provided by WDFW in 2020.

The Swinomish Indian Tribal Community and WDFW have cooperated in a joint elk capture and relocation effort. The goal is to move or entice elk out of the valley floor and into upland areas by improving or increasing habitat. A number of government agencies, the Tribes, and private landowners such as Puget Sound Energy, Seattle City Light, Skagit Land Trust, and timber companies have made concerted efforts to enhance forage on public lands.

The number of hunting permits has increased each year over the last four years. Elk Area 4941, the area immediately surrounding the Skagit River from Sedro-Woolley to Concrete, is currently at 49 permits, not counting damage-related permits for qualifying farmers. There are even new approaches to hunting. One is called “targeted neighborhood management,” per the WDFW 2020 NCEH survey, “during the 2019-20 hunting season some producers (farmers) were provided damage permits and maps where they could hunt off their property but within their ‘neighborhood’ (with the neighbor’s permission).” The benefit of this approach is to increase pressure on the herd across multiple surrounding properties.

Will these methods work?

It’s too soon to tell. And, truth be told, it’s not likely that area farmers can hold their fire indefinitely. The elk have become acclimated to foraging on agricultural lands. Dissuading them from this behavior will not be easy. It has to be made very uncomfortable for the elk to stay on farmland.

The key is the target population. If the population can be increased while the damage is curbed or eliminated, it works for everyone. If it can’t, it doesn’t work at all.