National political news channel, The Hill, reports on EPA’s spokesperson referring to the $570,000 the EPA paid for What’s Upstream 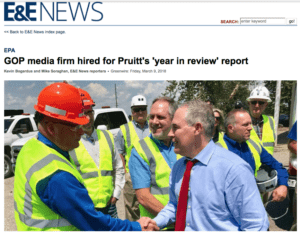 While our state administration wants to quickly forget the “What’s Upstream” campaign, we are very glad to see this EPA Administration has it very much in mind.

In case you forgot (or are new to this story), the What’s Upstream campaign got lots of national attention representing abuse of EPA against farmers. The EPA allowed $570,000 of taxpayer money to be used in a public lobbying campaign filled with lies about farming and pollution. Lying with public money is illegal and lobbying with any money in our state is illegal (apparently unless you are the EPA and/or someone who works for a tribe.) For details about this disreputable episode, refer to our information on this site.

Two national news outlets on March 9, 2018 carried the story of the comments made by Jahan Wilcox about the What’s Upstream campaign and the fact that the previous administration hired a political PR firm to conduct the malicious attack on farmers. The Hill, a widely known political news channel, and E&E News covering energy issues, both covered the comments by Wilcox with reference to What’s Upstream.

The context was a bit of brouhaha over the current administration hiring a Republican media firm for a communications project to the tune of $6500 (what can you buy in DC for $6500 these days?) The answer was not only was it much less expensive than other vendors, but that the previous administration had hired a Seattle PR firm (Strategies360 whose principal Ron Dotzauer has run many Democratic campaigns) to smear farmers and lobby for anti-farm legislation.

What we are pleased about is that the attention brought to this abuse by the EPA against our farmers is not being quickly forgotten. We hope that is true of our new Region 10 administration as well as the national leadership.

We remind everyone that this abuse is not a matter of left and right, Republican and Democrat. Using taxpayer money in this way is illegal and promoting lies against anyone is neither legal, ethical or justifiable.