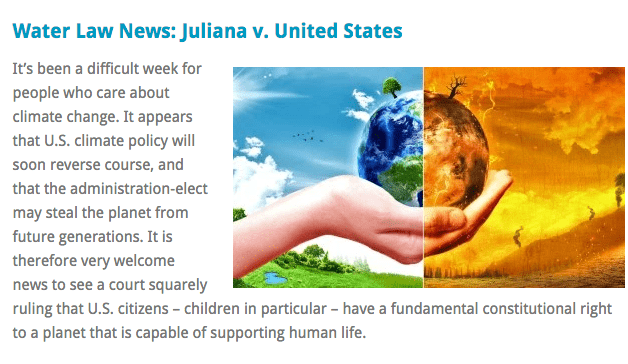 It doesn’t take much today to see threats against farming continue to rise. This website, called Naiads, is happy about a decision in an Oregon federal court that has decided in the Juliana v. United States case that because the constitution says we have the right to life, liberty and the pursuit of happiness, anything that affects that involving the environment can be adjudicated by the court. Using children as plaintiffs (a clever PR stunt also used by Western Environmental Law Center against the WA State Department of Ecology, the lawsuit is against the US government, but also against American Manufacturers and, of course, Big Oil.

The court ruled that anyone who claims they are harmed by something in the environment can sue and has standing in court: The Court ruled that plaintiffs have standing to sue based on specific harms they are experiencing as a result of climate change. One plaintiff has asthma that is aggravated by forest fires. Another’s family had to install an irrigation system because of drought. One of the plaintiffs lives in Louisiana and her home was inundated in the recent floods in that area.

So now, if you have asthma or have to water your lawn, you can sue based on the Constitution which after all, guarantees you the right to life, liberty and the pursuit of happiness. Floods are basis, too.

The conclusion of the judge’s comments are enlightening and chilling:

This action is of a different order than the typical environmental case. It alleges that defendants’ actions and inactions . . . have so profoundly damaged our home planet that they threaten plaintiffs’ fundamental constitutional rights to life and liberty. . . .

There are most certainly judges who believe their wisdom exceeds that of the elected representatives and should be declared the ruler of the land. In fact Judge Aiken believes this about herself:

First, the Court held that the Juliana claims are not simply “political questions” that courts should refrain from deciding.

In other words, it should not be up to the elected representatives to decide government policy about environmental factors when those policies impede the constitutions rights to life, liberty and the pursuit of happiness.
​
From a farmer’s perspective, this has to be chilling. Anyone who makes a claim to be harmed in the slightest way by water or air contamination, pollution, maybe even noise or smell and accuses the farmer for taking away their constitutional right to life, liberty and the pursuit of happiness has standing in this court. What a world.