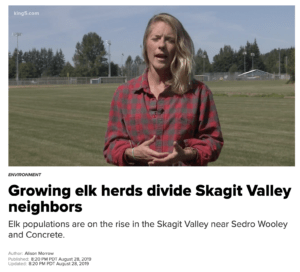 We appreciate Alison Morrow and KING5 News bringing much needed attention to the serious problem posed by imported elk in an area of farms, homes and schools in Skagit County. This brings important attention to safety concerns expressed by two school superintendents and bus drivers in the area, as highlighted in this video.

The headline and story suggests a strong controversy within the community about these elk. This is not accurate. Tribal leaders have opposed the reduction of this herd for some time which is likely the primary reason the WDFW, while sympathetic to the serious damage and risks to children, have failed to act in a responsible manner. Everyone involved in this situation has a high appreciation for wildlife. Farmers, homeowners and school administrators certainly understand the concern of the tribes.

Considering these elk “sacred” is not supported by the history of this situation. Locals report that there is no evidence in pre-European days of a strong presence of elk in this region. The first importation of elk on the valley floor occurred in 1946 when nine elk from Snoqualmie Island and six from Yakima County were released in area near the South Fork of the Nooksack river. The elk from Snoqualmie Island were the result of a release of 80 animals in King County in 1912. These were Rocky Mountain elk from Montana. They migrated through Acme into Skagit where they were hunted to extinction mostly by tribal hunters.

After the 1946 release there was at least one additional importation which suffered the same fate. Tribal policies at that time apparently did not consider these animals sacred in the same sense they do today.

This particular herd of now about 1500 animals was imported in 2002. They were brought in by trucks from the Mount St. Helens area with the intention of delivering them into the higher mountain areas above the valley floor. But as it was snowing, the truckers dropped them off in the farm country. Easy food and protection against hunting have allowed the herd to grow at a rate of about 20% per year. Though they may be sacred, these animals were intended for the much vaster mountain regions surrounding the valley floor where farms, homes and schools are concentrated. It is past time for the WDFW to recognize that the interests expressed by tribal leaders is not consistent with their actions and that those affected need to be protected from the serious dangers these misplaced animals represent. We can better honor these animals as sacred and highly valued by making certain they live in the habitat meant and best suited for them.

No, the community is not divided. Those who live here and understand the history and place of these magnificent animals are united in determination to protect their children, their homes, their schools and their farms.