Environmental lawyers, like Charlie Tebbutt who is the primary litigator profiting from the dairy industry litigation, need clients. In Yakima, an exceedingly small organization (one person?) served that person. But in conducting the appeal of the Department of Ecology’s CAFO permit, Mr. Tebbutt has relied on his environmental litigation supporters including primarily Puget Soundkeeper Alliance. The Western Environmental Law Center, headquartered in Eugene, Oregon, has supported this effort and benefited financially including from grants received from the Rose Foundation negotiated in settlements with the litigation targets of Puget Soundkeeper Alliance.

But, are they right in what they say about dairy farms?

Not even close. What’s worse, their actions violate their stated organizational missions. We do not believe donors who know about this activity will support it.

Below is a detailed review of their accusations against our farms. Their position was most recently expressed in the May-June Pollution Control Hearings Board hearings where the attorney for these groups claimed (with a straight face) that “Washington is burning with manure.” Is he trying to blame the wildfires on dairies now, too?

You can read our detailed rebuttal to their false accusations here, or download the document.JTNDaWZyYW1lJTIwaGVpZ2h0JTNEJTIyNTAwJTIyJTIwd2lkdGglM0QlMjIxMDAlMjUlMjIlMjBzcmMlM0QlMjJodHRwJTNBJTJGJTJGd3d3LnNjcmliZC5jb20lMkZlbWJlZHMlMkYzODYzNzM3MTAlMkZjb250ZW50JTNGYWNjZXNzX2tleSUzRGtleS1QTTJ5aWZEa0lLdVVzT2w4U3A5ViUyNmFtcCUzQmpzYXBpJTNEdHJ1ZSUyNmFtcCUzQnhkbV9lJTNEaHR0cCUzQSUyRiUyRnd3dy5zYXZlZmFtaWx5ZmFybWluZy5vcmclMjZhbXAlM0J4ZG1fYyUzRGRlZmF1bHQwJTI2YW1wJTNCeGRtX3AlM0QxJTIyJTIwaWQlM0QlMjIlMjIlMjBmcmFtZWJvcmRlciUzRCUyMjAlMjIlMjBzdHlsZSUzRCUyMmJvcmRlciUzQSUyMDBweCUzQiUyMiUzRSUzQyUyRmlmcmFtZSUzRQ==

What is the “litigation industry” and why are they targeting dairy farms?

The litigation industry is simply the business of making profits through legal action. There are about 1.4 million lawyers in the US. On average they make $140,000 per year. That’s $20 billion per year. Of course, the cost of lawsuits is much higher. Tort litigation – that involving harm done by one person or entity against another – costs about $300 billion per year. That means one way or another we each pay approaching $1000 per year for this litigation. We may think the companies or those doing wrong pay the bill. Not really. It’s a cost all of us must bear through costs being passed on. Take medical bills as an example: about 30% of your medical bills are related to this litigation. Got a $10,000 doctor or hospital bill? $3000 of that went to legal costs.

The US is unique in that it has three times more lawyers than Britain and 40 times more than Japan!

Why is this? Do we have a lot more bad people or organizations doing bad things to others than Japan? No. But their culture and politics do not support the litigation industry as we do in this country.

The problem with so many lawyers trying to get rich by using this profit model is that they continually need to find new targets. If ready-made ones are not available, they need to create them. Our nation’s laws, particularly those that allow for citizen lawsuits, provide a ready supply of potential targets. Enterprising lawyers look for the deep enough pockets, or as is often the case, those with the insurance coverage that can be tapped. Actual harm is often not the determining factor. As we discovered with the Puget Soundkeeper Alliance and RE Sources lawsuit against Ferndale Grain, these lawsuits typically involve very minor permit violations which are uncovered by a Seattle law firm which does nothing but comb through detailed permit reports to find even minor reporting violations. These serve as the basis for action which is filed for multiple millions with the intent of settling for far less. It’s a business, an industry. In the case of the Clean Water Act lawsuits we looked at, it is also a fund-raising venture as environmental groups participating in the lawsuits benefit from them through “grants” provided by the Rose Foundation in California. The settlement with the target includes payment to the Rose Foundation instead of to the Federal treasury.
​

Vermont looks to face some of the problems that Washington dairy farmers face. The litigation industry is targeting farmers for pollution issues. It does not matter that farms have been dramatically improving their environmental performance. It does not matter that most water pollution blamed on dairy farms comes from on-site septic systems which are designed to release nutrients to groundwater. There is no money in suing homeowners for the use of these systems.

Farms? That is something different. This story on the Vermont legislature considering a bill to allow citizens (read: lawyers finding a willing client to put on their lawsuit) to sue dairy farmers highlights the issue. Note what the legislator sponsoring this bill says: “What we’re really talking about is not a lot of lawsuits,” Pearson said. He said the fears of being sued are overblown. That’s because a citizen contemplating a suit has to give 90 days notice of the potential legal action. That gives a state agency and the polluter time to address the problem.

No, Rep. Pearson is not really as naive as he sounds. But there is a very good chance his campaign is funded by lawyers. Lawyers, particularly Trial Lawyers, have consistently ranked as one of the top or the top industry funding political campaigns. Their money is invested with those elected officials who show their willingness to support the litigation industry. Why do we have 40 times more lawyers than Japan? The answer is obvious.

About three years ago, a group of dairy farmers in Washington got together. They were facing the possibility of lawsuits exactly on the basis we are talking. Someone asked the question: What would you do if you were given the 60 day notice of intent to sue? About half said they would sell the farm. The cost of even beginning to defend yourself against this threat would bury most family farmers. Even worse, farms will not pass on to the third, fourth or fifth generation because the children who are observing their parents endure the stress and uncertainty not just of terrible economic conditions, but of the continual threat of lawsuits, choose not to continue the farm. Another farm sold. Chances are, more good farmland converted.

There is no benefit to the public of this litigation industry attacking dairy farms. There is great harm.

Forcing farms to produce nutrient management records is not about transparency, it’s about making life easier for the litigation industry 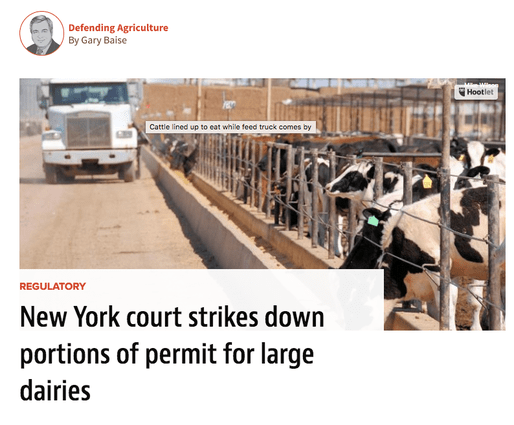 Anti-farm activists, driven by the litigation industry (attorneys who sue for profit as a business model), have long complained that not all farm information is available to the public. This is an appealing argument because we live in an age that places a high value on transparency. As the Washington Post slogan says: “Democracy Dies in Darkness.” We assume, sometimes rightly, that if someone isn’t forthcoming about what is going on, they must be hiding it for a reason.

So they pressure governments to require farmers to publicly reveal information about how much nutrients they apply to their fields, for example. We have learned in this country that while transparency is a wonderful thing, sometimes it works to the benefit of those not seeking the public good but seeking to harm it. Prior to 9/11, for example, industrial facilities dealing with dangerous substances were required by law to publish their worst case disaster scenario. A refinery for example, had to analyze and make available on a public website the very worst thing that could go wrong and how many people would be affected. After 9/11 with the reality of terrorism and the use of the internet to gather intelligence to select targets, this level of public transparency was seen to be not in the public interest.

What about farm transparency? Groups aiming at dairy farms and other animal agriculture including Waterkeeper Alliance (affiliated with Puget Soundkeeper) and Sierra Club (since when did they decide to become anti-environmentalists?) have won a victory in New York requiring farms to provide information about their application of nutrients (organic fertilizer otherwise known as manure) to their fields. Is this in the public interest? It might be if it wasn’t already closely managed. In Washington, for example, all dairies are regulated by the 1998 Dairy Nutrient Management Act which requires plans and record keeping of all nutrient application. This includes soil tests to ensure that the farmer avoids putting more nutrients on the crops than the crops can use thereby helping prevent groundwater pollution. The regulations are enforced with numerous inspections by the Washington State Department of Agriculture. The fact that groundwater is improving in areas where there are a concentration of dairy farms is just one of many indications that these regulations along with responsible stewardship are working.

Farmers are concerned about the effort to force public access of information that is now provided to the government not just out of fear of lawsuits, but because this constitutes competitive information. Most may not realize it, but our dairy farmers compete against other farmers all around the world. The price they get for milk is determined on a global basis, not set by the farmer. So competition is based on efficiency and cost control. Farmers are constantly looking for ways to improve their operations which means increasing production at the lowest cost while protecting the land, air, and water. Nutrient management is one significant element of efficient operations. If you had a business that had a “secret sauce” how would you feel about being forced to reveal that to all your competitors through the internet?

If this transparency isn’t needed to ensure compliance and to protect our water, what is it needed for? To satisfy public concern? When’s the last time you heard a friend or neighbor say “I sure wish I new how much cow poop farmers are putting on their fields.” It’s not a matter of major public concern. Then what is it? Simple. The litigation industry. Activists push this because lawyers who are profiting (some major bucks) by suing dairy farmers want easier access to this information. Now, you might think, that well, if farmers are doing something wrong they should be held accountable and this is a good way to do it. No, it really isn’t. Because as we have pointed out, this isn’t about pollution or accountability, this is about lawyers profiting and their clients (the anti-farm environmental groups that used to be about actual environmental problems) raising money. Not sure about that? Please read the expose of the questionable “citizen lawsuits” by Puget Soundkeeper Alliance on this website (third story down).

Before cheering this New York decision as a step toward more transparency, consider this. Dairy farmers in Washington are already incurring unsustainable costs while lawyers suing them are getting rich. Is it because our farmers are bad? No, it’s because they don’t enjoy the protections against these kinds of lawsuits that other neighboring states have. We think most will agree with the sentiments of Washington State House Agriculture Committee Chair Brian Blake (D-Aberdeen) who said: “My concern is not the health of the litigation industry. My concern is the health of the environment and the dairy industry.”