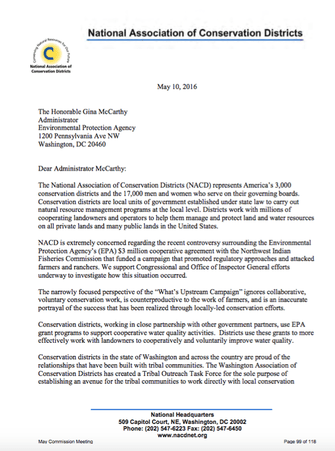 On May 10, Lee McDaniel, President of the National Association of Conservation Districts wrote to EPA Administrator Gina McCarthy.

The letter expresses “extreme concern” over the EPA funding of the “What’s Upstream Campaign,” stating that “the campaign ignores collaborative, voluntary conservation work, is counterproductive to the work of farmers, and is an inaccurate portrayal of the success that has been realized through locally-led conservation efforts.“

It goes on to state:

Read the entire letter on the EPA Funding Documents page.