A new lawsuit filed by FUJ alone without the UFW reveals these two unions, long known to be competitive and unfriendly to each other, have very different goals. Rosalinda Guillen operates a worker center called Community to Community out of Bellingham. Worker centers are union-supported non-profit organizations that allow union organizing activities which are prohibited for unions under federal labor laws. Her goal is to stop guest workers from working in Washington state. Her tactics are to attack farmers who hire guest workers, get media coverage of the false accusations, initiate strikes and boycotts and force farms to sign contracts with her union to stop the boycotts and harmful media coverage. This tactic worked in her actions against a multi-generation Japanese-American family farm in Skagit County and the farm signed an agreement that allows her union to take 2.5% from each worker’s paycheck whether the workers support the union or not. When the pandemic hit, Guillen used the crisis to loudly call for the state to ban 22,000 guest workers with legal visas from coming in to harvest fruit crops in Eastern Washington. Simply put, she wants to stop workers from working and farms from raising crops in an effort to force more union agreements and more pay from worker paychecks. 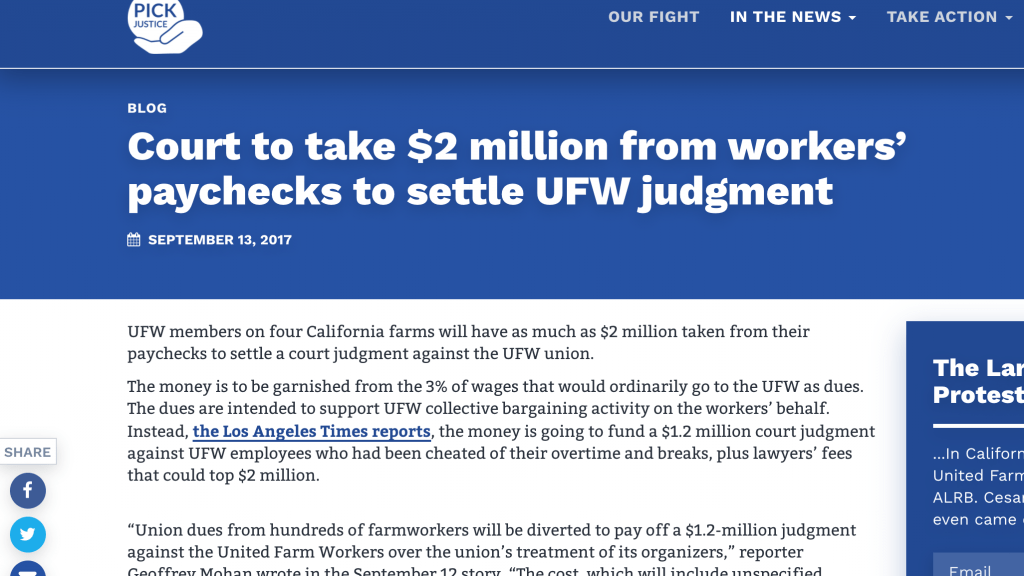 UFW fired their own employee for starting a union, then lost a $2 million settlement including back pay for missing wages and attorney fees. The court had to take money from the few remaining union members to pay the settlement.

United Farm Workers’ regional leader, Erik Nicholson, helped the state write the new rules as stated by Governor Inslee. He agreed to moderate the most extreme rules the state rushed out following the initial lawsuit. Nicholson and UFW are not trying to stop the harvest and prevent guest workers. In fact, the union was very instrumental in helping write the new federal Farmworker Modernization Act that has passed the House and waiting for the Senate to take it up. This bill, most farmers agree, would help ease the very difficult farm labor shortage. UFW’s tactics, while not opposing guest workers, are still aimed at forcing farms into signing union agreements so they can take a percentage from the workers’ paychecks. In California, fewer than 1% of farm workers are represented by the union and almost all votes in the recent past have been to decertify the union rather than certify it. Workers want to keep their money and the UFW has not shown they can help workers. It is not in the workers interest to have the farm they are working for go broke.  Plus, workers take note that the UFW retaliated against their own employee when he started a union of UFW employees. He sued, UFW lost and had to pay $2 million in back wages and attorney fees. The court had to take union dues from the few remaining members to pay the settlement.

In the early stages of Covid-19, Rosalinda Guillen tried to stop all guest workers from coming into the state. It would have cost 22,000 much needed jobs and devastated the fruit harvest. The latest lawsuit she filed through her union shows she is still desperately trying to end these jobs and cause loss of harvest and farms.

So, while Rosalinda tries to stop the Washington harvest and take valuable jobs away from many workers who depend on them, Nicholson and UFW seem to understand that without farms there will be no jobs. Domestic workers with a legal path to citizenship as provided in the bill UFW supported, is likely seen as a new opportunity in the future. A farm in Sumas, Washington attacked by Rosalinda in 2017 had provided jobs for 600 guest workers. Using questionable lawsuits, promoting vicious lies about the farm causing the death of a worker, and attracting Seattle media attention, Rosalinda succeeded in stopping the farm from providing jobs to these workers. 400 Mexican families lost their much needed income and the farm bought harvesting equipment to replace the workers.

The new lawsuit filed by FUJ alone is consistent with Rosalinda’s goal of stopping the harvest and killing jobs. Using the worn out mantra of lives versus farm profits, the lawsuit ignores the fact that the state regulations––crafted by the UFW according to the Governor––almost certainly go far beyond any other state’s protections for farm workers. Farm workers are deemed essential, and national statistics show that of all essential workers farm employees are likely the least impacted by Covid-19. That is in part because farmers, before the state issued draconian new measures, were already following guidelines, including those of industry groups that were often more stringent than federal and state guidelines.

This new lawsuit is merely a new attempt by Rosalinda Guillen to stop the harvest and prevent farm workers from doing the jobs they want and need.