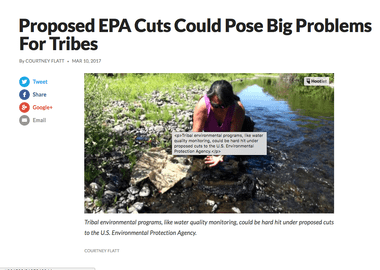 They say there are two sides to every story. But most of the reporting and certainly from NPR doesn’t suggest that when it comes to EPA funding.

We showed here earlier some of the numerous NPR reports about the horrors of EPA funding cuts. Now, this one about how the tribes would suffer if the new administration follows through on funding cuts. Our point is not to comment on whether cutting the funding would be a good idea or not. We are strongly in favor of appropriate funding for environmental protection. But that is our point here. We don’t see that the millions and millions the EPA has spent has delivered much of value.

Certainly our view is affected by the fact that the EPA knowingly approved $655,000 of environmental restoration money to fund a campaign full or lies, distortions, false accusations and overt political activity called What’s Upstream. These funds were part of an $18 million National Estuary Program grant provided to the tribes through the Northwest Indian Fisheries Commission. While we focused on the Whats Upstream campaign run by the Swinomish Tribe, a look at some of the other funds also raises questions. Take the “Tribal Journey,” for example. We challenge any one interested to find the results of this “water quality monitoring” program. We did find some results but it took an awful lot of digging, numerous phone calls and referrals to various government offices. We didn’t even get to the next question: how is this being used?

We are very upset that despite promises to the contrary made to Congressional leaders, the EPA granted an additional $25 million in environmental restoration funds to the Northwest Indian Fisheries Commission. In defending himself against our complaint about illegal campaign activity, the Region 10 Administrator declared that when the EPA gives money to the tribes, it has nothing to say about how it is spent. Come on. So we are turning over, just in the Puget Sound region, upwards of $50 million to groups who can do what they want with it, including running public campaigns full of lies and spend money to pass citizen’s initiatives and pass legislation?

We have in our region the Puget Sound Partnership. This was started by Governor Gregoire and while there are many concerns about the value of the millions spent here, we have to ask why the EPA is not directing its millions there?

More than that, we have to ask NPR and KUOW while they are refusing to ask this question.