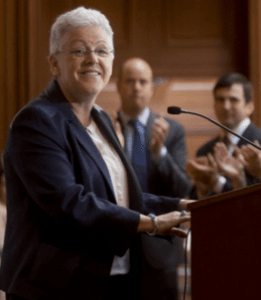 Outgoing EPA Director Gina McCarthy explains in this interview with the Washington Post that “science is fundamental to everything we do.”

The Director said: “Science is everything. Almost every action we take is bounded by what the science tells us. It’s based on a factual record of where the world is today and what is our obligation under our mission. Science needs to be protected. Any effort to undermine that science in a way that would give undue influence to folks that aren’t scientists is a really big problem.”

Not in Region 10 where EPA staff ran roughshod over science in number of examples in their dealing with farmers. We will provide more details of the disregard for scientific procedures demonstrated by the staff and how they dealt with the scientists who called them to task for this.

While we think the Director is out of touch when it comes to how EPA Region 10 dealt with farmers, in her interview she pointed out the failure of EPA to build relationships with farmers as perhaps the greatest failing of her time at the agency. She said:
​”EPA does not have the strong relationships with rural communities that it has with urban communities. We work in a lot of communities, we work on a lot of urban-related issues. We have great relationships with mayors. But we have tended to not be able to have a very compelling rural agenda and to build constituencies there. That’s been challenging for us.”

If there is a single symbol of the well established urban-rural divide, it may be Director McCarthy. It is a vast understatement that the EPA has failed to build a connection to rural communities. The What’s Upstream debacle may be the poster child for this, but it is seen in many interactions between EPA staff and farmers. We have heard from a well-placed source that Region 10 has a reputation for being the most antagonistic to farmers of any EPA region. And we are are aware of the what Senator Roberts and Inhofe noted about the reputation of EPA for antagonism to farmers nationally. Maybe a starting place to correct the clear failing of McCarthy and McLerran’s leadership is to get the heck out of downtown Seattle and put the region HQ in a more rural environment.

it’s clear the next EPA national director and Region 10 Administrator have their work cut out for them. We don’t have much to thank Director McCarthy for, but we can thank her for pointing out this very serious failure of her administration with the hope that the incoming leadership will take notice.

UPDATE: AgInfo’s Bob Larson highlights the issue of EPA disconnect from the rural communities in this January 6 edition of the Farm Bureau report: