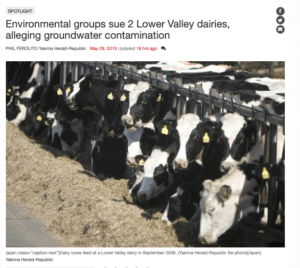 These lawsuits are an abuse of the court system. Enforcement of pollution laws belongs to government agencies. In the case of dairy farms, it is the Washington State Department of Agriculture that inspects farms and enforces the strict dairy management laws. If Mr. Tebbutt believed they were not doing their job, he should talk to them. This litigation and other dairy lawsuits with his exorbitant demands for legal fees and settlement costs demonstrates that this isn’t about pollution, it is about earning those outrageous fees.

The Department of Justice has taken action against similar abuse in California and Save Family Farming will be bringing these abusive lawsuits to the Department’s attention. 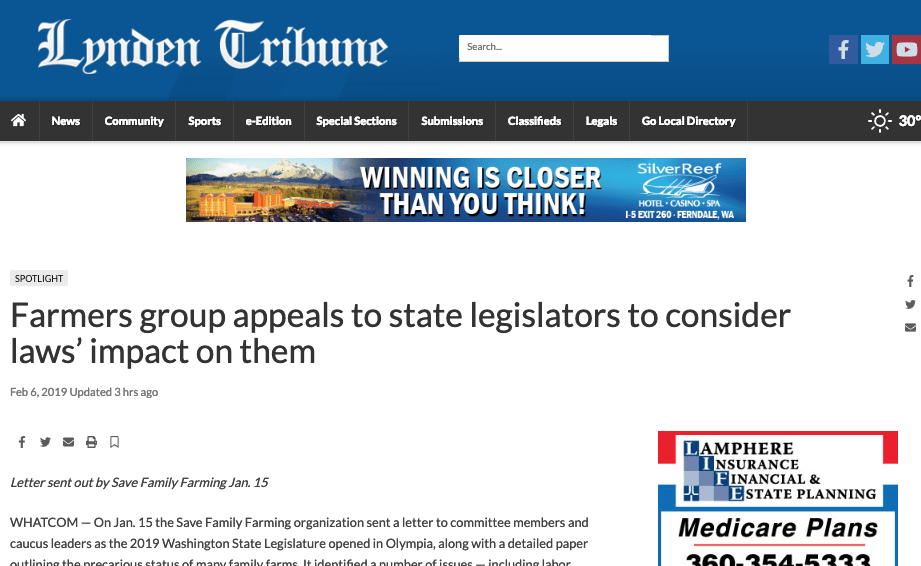 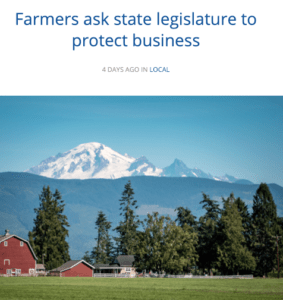 KGMI Radio reports on Save Family Farming’s appeal to the 2019 legislature to talk to farmers and be cautious about actions that will further hurt the prospects for our struggling farmers.

FoxQ13: to restore chinook we have to deal with seals 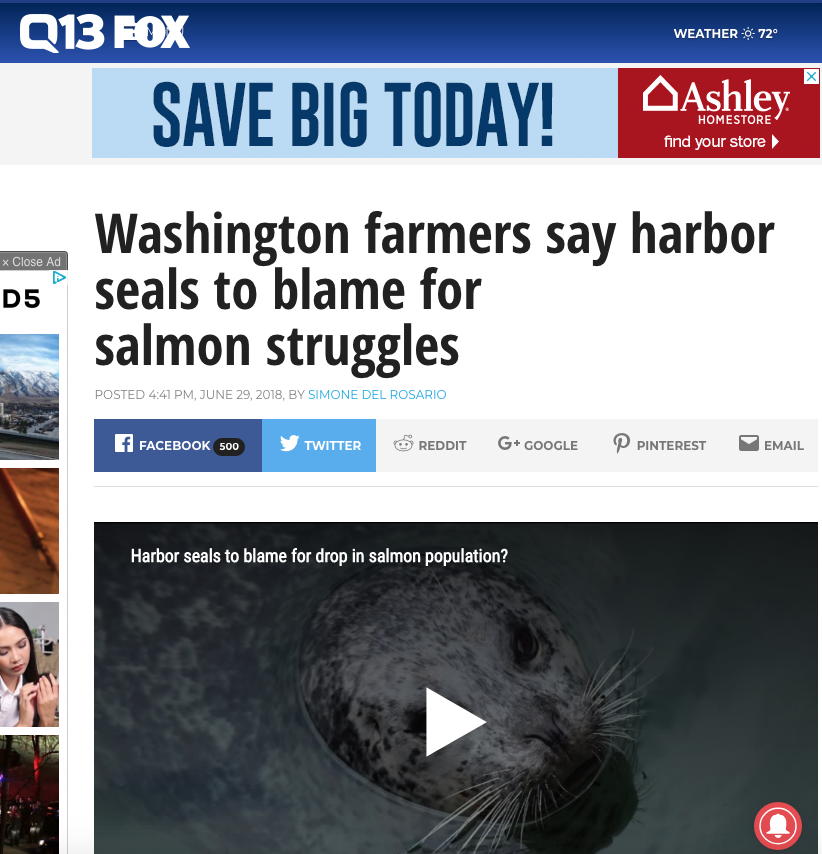 Monroe dairy farmer Jim Werkhoven explains the many investments made by farmers to restore chinook, but how the unique problem of harbor seals in the Salish Sea is making chinook recovery through habitat alone impossible.

This July 2 editorial in Seattle’s Crosscut news channel mostly gets the salmon story right. One big error: Pacific salmon are not suffering. All species of Pacific salmon are at record numbers according to latest science study, except for chinook.

What it does get absolutely right is the opportunity for and need for collaboration in the effort to restore the threatened chinook and help our local starving orcas. It’s clear we won’t solve the problem by returning to the same old solutions that we have spent billions on while chinook continue to decline. Science studies show that we must address fundamental causes in order to see results. That fundamental cause of Salish Sea chinook decline is the explosion of harbor seals. 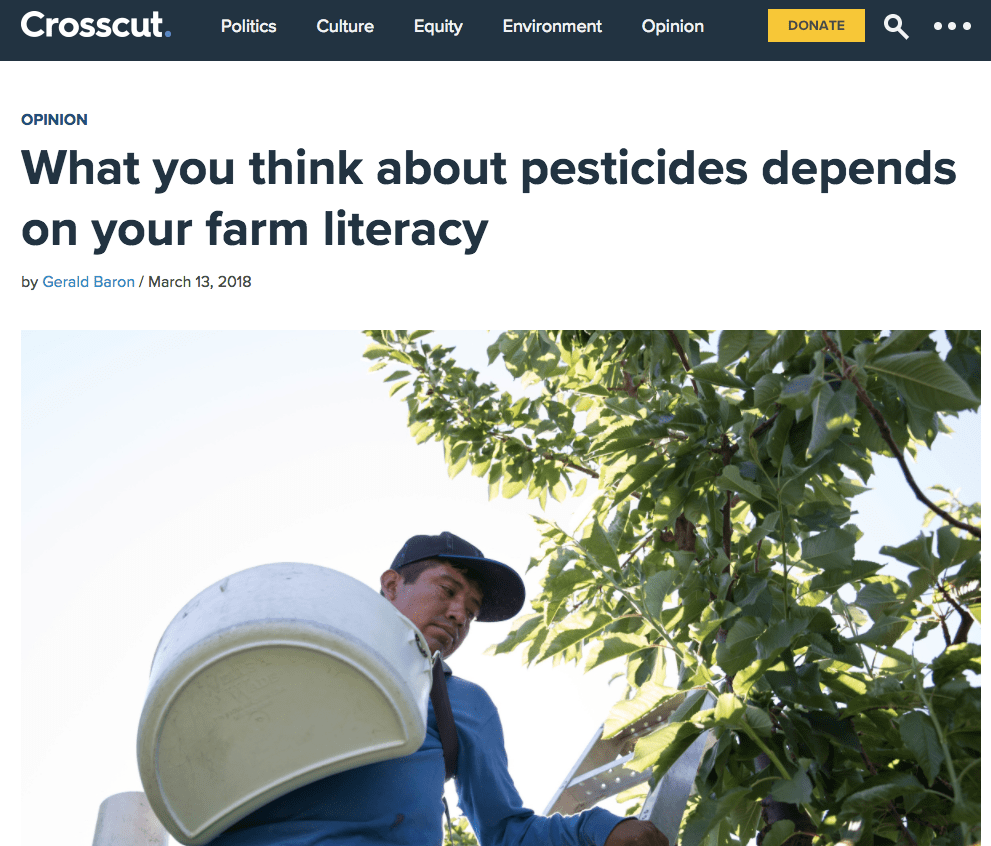 Crosscut published our guest editorial on March 13 explaining why the pesticide bill introduced in the past session by Seattle senators was such a bad idea. It explained how farmers work to protect workers and the community while only using the crop protection materials needed. It showed how the urban-rural divide leads to this kind of errant effort.

Crosscut editorial:
In January, Knute Berger and Matt M. McKnight took the time to visit some of our farms in Whatcom County and then explained in Crosscut why bridging the urban-rural divide is so important for our state and communities. After all, as they mentioned, our failures to understand one another can blossom into hot political issues. What happens in urban areas affects farming and rural communities — and vice versa. For instance, a crisis in farming can quickly disrupt the food chain supplying city dwellers.
In February, the issue of pesticide use by farmers arose and provided a compelling example of what happens when the bridge between rural and urban mindsets fails.
A bill was introduced into the Legislature by well-intended and mostly urban legislators. It proposed to solve a “problem” with pesticide application by requiring four days’ notice before a farmer could apply necessary crop-protection materials. Farmers opposed the measure which was reported in Crosscut. That February article, in the view of farmers, added to the bill sponsors’ misperceptions about farmers and their interest in protecting workers, consumers and neighbors.
Farmers are very concerned about protecting workers and all others who may be impacted by use of these invaluable materials. Since 95 percent of Washington farms are family owned and operated, those workers include themselves and their families. Farmers had three main concerns with the pesticide legislation as introduced:

Current pesticide laws are stringent and enforced. Drift of these materials is illegal and serious fines can be imposed if drift occurs. Applicators are required to keep detailed records, including weather conditions at the time of application, and these records can be accessed by regulators to ensure compliance. Notification to workers of application is also required.
In the legislative hearings, no substantiated problem was presented. Washington state maintains a database of reports of pesticide exposure, as required by law, and it reveals a substantial portion, if not the majority of complaints, are related to home and urban use rather than farm use. Unlike most other exposures, those originating on a farm can lead to enforcement and penalties.
The bill as introduced was ill-conceived not just because it was a solution in search of a problem, but because the consequences would have been more harmful than any possible good. Application of organic and conventional crop-protection materials is very sensitive to weather conditions to avoid drift. It is also very sensitive to crop conditions. Farmers don’t use expensive materials unless they are needed to protect their crop. This means farmers have to make decisions quickly to apply when the crop most needs it and when weather conditions allow. To require four days’ notice would mean that crops would be lost or much more material would have to be applied in anticipation of the need rather than based on actual need. No doubt, crops would be lost and farming in Washington would be made much more difficult if not impossible for some.
That’s not a good thing for consumers, as most prefer locally produced food. Already, we are seeing a very rapid increase in imported food. Mexican berry imports have grown by 500 percent in 10 years, according to the Wall Street Journal. And the USDA reports that in 1980 we grew all our avocados in the United States, but now about 80 percent come from other countries. The FDA reports that imported foods are five times more likely to have pesticide residue above limits than domestic food. Keeping food production local to our state is important, and we believe strongly supported by our urban neighbors.
We are grateful that the voice of farmers was heard and the pesticide bill, as passed, does not add new requirements but establishes a study group. We are confident that this group will find that, as farmers have said, current laws are protective and there is no “problem” to solve.
The primary concern of farmers about the proposed legislation is that farmers were not consulted. If the sponsors had taken the time to talk to a few farmers, these simple facts would have been understood. Farmers also would have had the opportunity to ask these urban legislators why they are trying to solve non-problems on the farms when urban areas have more of a pesticide issue than farms. A state study, Washington State Pesticide Monitoring Program 1997 Surface Water Sampling Report, showed serious pesticide problems in urban streams in Kirkland and Olympia. The report noted that the average number of pesticides per sample were among the highest in the state and that “pesticide use in urban areas was three times greater than in agricultural areas.”
We hope urban pesticide use has improved since 1997, but the proposed bill and media reports call to mind “the pot calling the kettle black.”
Knute Berger’s article gently and effectively pointed out that farmers need to learn from city dwellers and those in the “food desert” need to learn from farmers. We’re grateful he acknowledged the growing effort of farmers, including Save Family Farming, to better inform the urban populations who hold the political power in this state. Berger noted: “Save Family Farming is reaching out to let us know they are experiencing challenges in their part of the food chain. It would be sensible for us city folk to up our ag-literacy before that chain becomes another crisis.” Well said.

AgInfoNet’s Bob Larson interviewed Save Family Farming Executive Director Gerald Baron on the root cause of chinook decline and why farmers are getting involved in this critical issue:

BARON … “The reason this is so important is because this shows that the fundamental issue affecting Chinook recovery is not habitat, not water, it’s not instream flows, it’s none of those things. It is the explosion of Harbor Seals, particularly in the Salish Sea.”

BARON … “Unless there is some adjustment made to that so that the numbers of Harbor Seals can be reduced, we’re going to continue seeing Chinook decline and no further investments in habitat or in stream flows or anything like that are going to help solve the problem.”

BARON … “That’s why this is so important for farmers to say, ‘we’ll continue to work on habitat issues, but if we can’t come together and address this predation issue then all that we’re doing there will count for nothing and people need to understand that.” 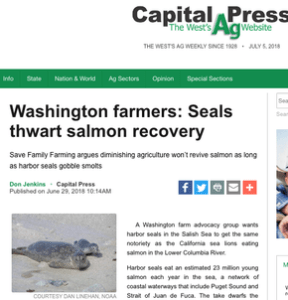 West Coast farm newspaper explains how farmers are working to get policy makers to address the fundamental cause of chinook decline in the Salish Sea – decline that is causing Southern Resident orcas to starve while other orca populations thrive. 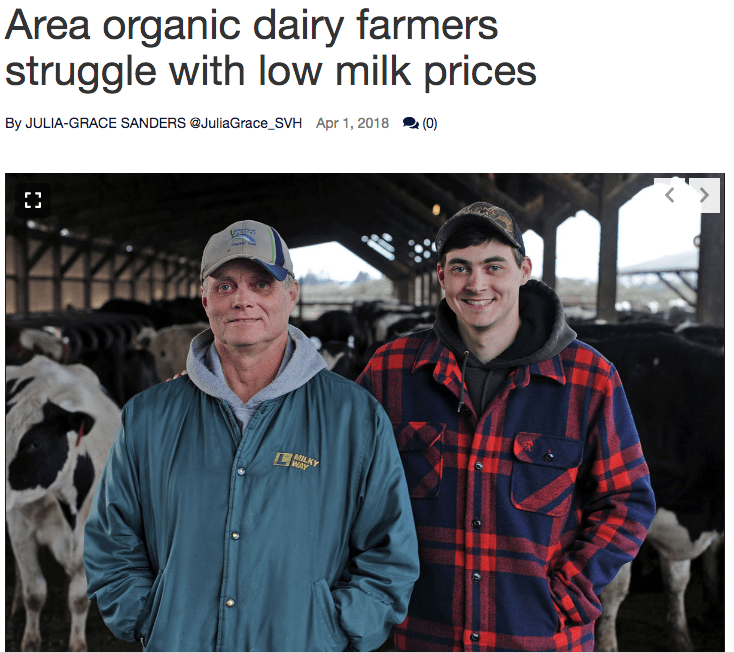 Story in Skagit Valley Herald tells the story of declining prices for organic milk and its impact on the five organic dairy farms in the Skagit Valley. 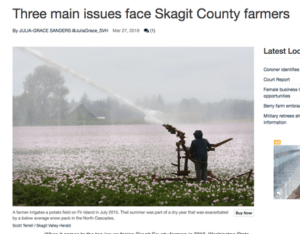 Don McMoran, a Skagit farm leader identifies water, labor and economic viability as the three issues of most concern to Skagit farmers.