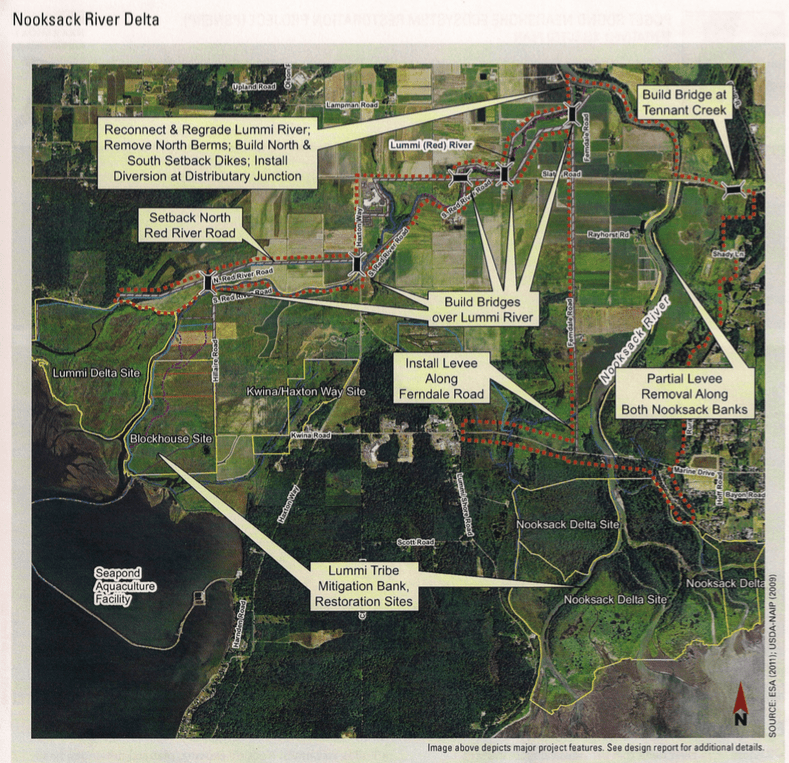 Farmers are asking: Are we sure this is the best way to spend money on salmon recovery and environmental enhancement?

The plan to spend a half billion dollars of taxpayer money on salmon recovery and environmental enhancement in Puget Sound came to public light in mid-October with much political fanfare. For many years the Army Corp of Engineers and the Washington Department of Fish and Wildlife (WDFW) have been developing plans to restore estuaries in the Puget Sound. On October 18 three primary projects were announced and the process to secure $452 million federal funding has begun through a US House bill called the Water Resources Development Act.

Farmers in the Puget Sound are leaders in salmon recovery and environmental enhancement, but are concerned PSNERP would not provide the advertised benefits and would undermine the more effective, collaborative programs currently underway. Farmers are asking the state sponsor, the Washington Fish and Wildlife Department for three things:

1.  Work with farmers and farm groups most impacted by the project

2.  Ensure best science is used in selecting projects and designs and not political considerations

3.  Coordinate with current collaborative efforts and ensure federal dollars are used in a way that minimizes farm impacts and maximizes environmental benefits

Let farmers be part of the process

There has been very little discussion with farmers about this project, including those farmers whose lands have been targeted for acquisition. In the Nooksack Delta project which constitutes nearly one half of the money to be spent, one farmer/landowner has been contacted even though there are more than thirty others involved.

More than 1600 acres of productive farmland would be lost in the current design, including those lost from filling existing drainage ditches. It’s important to understand the impact on neighboring properties as well and these impacts are not really addressed. This represents almost 2% of the declining available farmland in Whatcom County. The Army Corp report stated this loss of land was “insignificant” and that it was easily replaced. Much of the lost land grows seed potatoes which which can only be grown in specified areas and cannot be replaced with other farmland anywhere near. It would constitute a devastating and irreplaceable loss to a third generation family farmer. Imagine going to a third-generation car dealer who plans on passing the business to the next generation and saying that from now on you will be limited to selling only half the cars you now sell. Economies of scale likely mean the business is doomed.

New farmland cannot be manufactured and the Army Corp report statements about the impact of this loss highlighted the nearly complete lack of knowledge of farm impacts and engagement with farmers on the project. The Whatcom County community strongly supports maintaining a strong farming land base and this loss of productive farmland and harm to individual farmers will not be supported, particularly when it is understood better environmental projects with less damage are currently underway.

While less farmland would be included in Skagit County, the 250 acres is highly productive in an area that has already lost about 60% of available farmland. As in Whatcom County, there has been very little discussion with individual landowners, or the strong farm groups working on environmental protection in Skagit County including Skagitonians to Preserve Farmland and the Western Washington Agricultural Association. In fact, the letter from the Agricultural Association sent to the Army Corp expressing significant concern about the project selection and design was never included in the public comments. Neither was the letter expressing concerns sent by the Washington State Farm Bureau.

These omissions leave the impression that there is an intentional effort on the part of the sponsors to diminish the concerns already expressed by the farm community, and suggest that the minimal engagement done shows little to no concern. But there is great concern, particularly about the loss of valuable farmland.

As Skagitonians to Preserve Farmland pointed out in the October, 2016 newsletter, farmland in this area is at risk of losing critical mass: critical mass being that quantity of farmland necessary to maintain crop rotation and isolation requirements of an agriculturally-diverse Skagit Valley. Lose it and we go the way of the other Puget Sound valleys that have given over to urban sprawl and have no agricultural base left to protect.

Since the state sponsor, the WDFW has made it clear they will not use eminent domain, farmers are concerned that with the millions spent and the strong support of elected officials demonstrated at the public announcement, that farm interests will be ignored. A high priority for WDFW must be to much more thoroughly engage farmers, listen to their legitimate concerns and ensure that every effort is made to protect the rapidly declining farmland in the Puget Sound.

Use best science to improve the environment and salmon recovery

As can be seen by their actions taken, farmers strongly support the goals of salmon recovery and environmental enhancement. But the first three projects listed by the WDFW and the Army Corp appear to miss the mark, particularly in comparison to the other extensive and well-planned projects underway.

The first question is, where are the urban and urban fringe projects? Most cities are built on estuaries and that includes our Puget Sound cities. It is clearly understood that the greatest impacts to habitat are in urban areas, not where farms dominate. Water quality problems, estuary loss, salmon habitat losses are all more related to urban environmental impacts than farmland. Given the public commitment not to use eminent domain and the challenge of purchasing private lands in urban areas, projects selected look to be based on where the planners anticipated the least resistance. We strongly support using best science to apply this substantial investment, not political considerations.

The second question is, are these projects really aimed at environmental enhancement or are there other factors driving the plans? The largest portion of the Nooksack Delta project involves raising the level of a roadway and installing a major new bridge. These are infrastructure projects that will benefit those homes and businesses in the area, but it is highly questionable as to what benefit a new roadway and new bridge will be to salmon. The rationale presented is to remove dikes and flood land to provide more habitat for young salmon or smolts. Certainly, this could be done without new roads and bridges at much less cost. Yet many of the dikes and drainage ditches targeted to be removed were in place since as early as 1870 – more than 130 years ago. During over 100 of those years, the salmon runs in this region remained very high and steady. The dikes and drainage did not diminish salmon runs. Other conditions did and an explanation is needed why these measure are thought to be effective rather than addressing the root causes of salmon declines.

Commitment from farmers and farm communities dependent on farmers will hinge on answering these questions and convincing evidence that projects are selected on the basis of what will best serve the goals of salmon recovery and environmental enhancement and not on other factors.

The best projects are already underway–why not support those?

Farmers in the Puget Sound region are leaders in efforts to protect water and the environment and improve salmon habitat. Nearly 1000 miles of fish-bearing streams have been protected with buffers and native planting, and In Whatcom County, farmers have worked with the Conservation District to put in over one million stream-side trees. Farmers are working hard at protecting water quality and through the Whatcom Watershed Improvement Districts have projects in place to improve stream flows and other actions to improve fish habitat.

The Skagit river is known as one of the healthiest watersheds in the state and is the only river that provides a home for all six native salmon species, of which three have been steadily increasing in number. Organizations such as Skagitonians to Preserve Farmland, Western Washington Agricultural Association, the Skagit Watershed Council and the Skagit county government are all working in concert in support of the Chinook Recovery Plan. Already a significant number of recovery projects have been completed including in August, 2016, the conversion of 130 acres of farmland on Fir Island into fish habitat. While farmers were generally supportive of this project, the continuing pressure on farmland is a growing concern. The Voluntary Stewardship Program in Skagit County and the extensive protection measures in place in the Comprehensive Plan and Critical Areas Ordinance in Whatcom County all show the already strong role that farmers are playing in salmon and environmental restoration.

Our state, under the leadership of Governor Gregoire, established a master plan for environmental action in the Puget Sound. Called the Puget Sound Partnership, it coordinates federal, state, local and private dollars through a science-based and collaborative planning process aimed at measurable improvements in our Puget Sound environment. Farmers are among the many stakeholders participating in this process. Section A.2.1 calls to: “Protect and conserve ecologically important lands at risk of conversion” and states: “The preservation of intact, well-functioning land is an important element of these programs.”

Section A3 of the Puget Sound Plan explains in the clearest terms why farmers and those concerned about effective environmental action are so troubled by PSNERP. This section states:

Maintaining the vibrancy of agriculture is crucial to recovering Puget Sound and instrumental in providing a high quality of life in the region. However, farming in the Puget Sound basin faces an uncertain future. Global competition for agricultural commodities has reduced prices for Puget Sound farm products while costs of land and raw materials continue to rise. Low profit margins have forced many farmers out of business and farmland is being converted to other uses at an alarming rate. Rural areas have a low density of impervious surfaces and farmland provides greater flood plain function than developed areas. The continued loss of farms in the region and conversion to non-farm uses is not only detrimental to individual farmers and to the regional farm economy; but is detrimental to the recovery of Puget Sound.

An example of the on-going work being done that PSNERP funding should consider is the 3Fi project: the Farms, Fish and Floods Initiative. Partner organizations include: National Oceanic Atmospheric Administration (NOAA), Skagit Conservation District, Skagit County, Skagit County Dike and Drainage Partnership, Skagitonians to Preserve Farmland, The Nature Conservancy, Washington Department of Fish and Wildlife, Western Washington Agricultural Association. This initiative includes projects with the same goals, but unlike PSNERP, are planned in a collaborative manner.

Another on-going project to consider and one that that will need massive funding is the replacement of culverts in Washington state. Following a 9th Circuit Court decision, Washington state is facing a potential bill of nearly $2 billion to replace up to 800 stream culverts that are deemed to restrict salmon passage to spawning grounds. For salmon recovery, this may be far more significant than dike removal and filling drainage ditches because today there are two few smolts. Smolt rearing habitat is important if there are smolts to occupy it. This is an important current project that will need funding and the kind of project we believe PSNERP advocates should consider.

Summary: Let’s fund environmental enhancement, but let’s do it the right way

The first three projects identified in PSNERP clearly do not fit the Puget Sound Plan. This plan emphasizes collaboration along with preservation of farms and farmland. It is difficult to understand how those supporting federal funding, and those spending millions of tax dollars so far on developing PSNERP, have ignored the basic principles established.

We believe farmers, farm supporters and environmental groups can and should agree that PSNERP’s projects should: