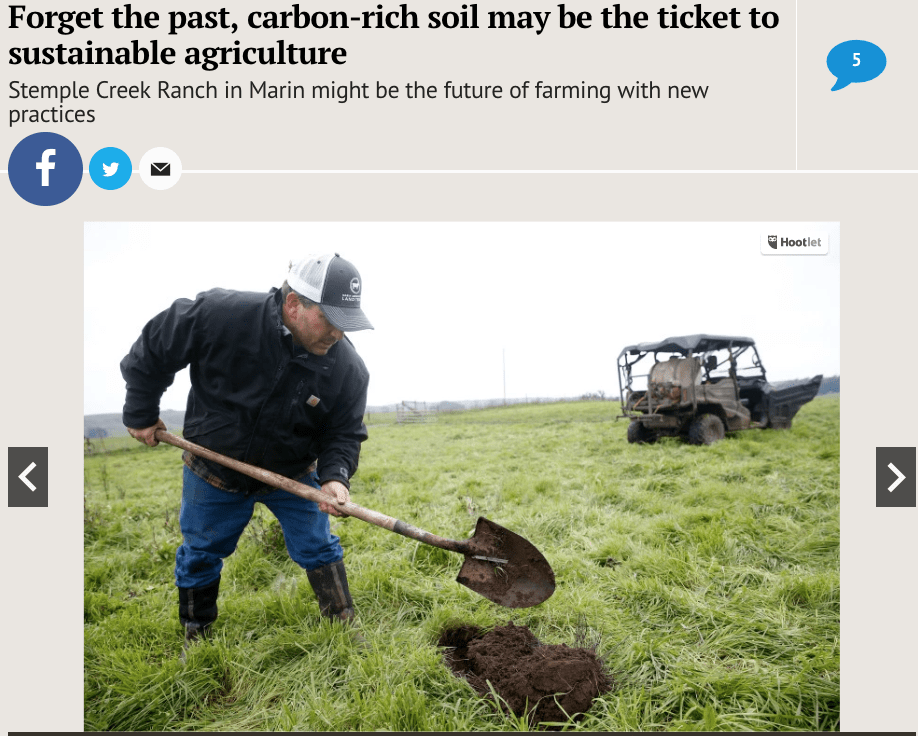 Hey, there’s a powerful new idea out there about farming and climate change! This article in Mercury News explains the new idea called “carbon farming.” Here’s what it means according to the article:

“We found a clear correlation between the addition of manure to the soil system and an increase in carbon numbers,” Creque said. During the second year, they stopped adding compost and observed any changes that occurred in the plots. But even then, they observed a significant increase in the level of plant productivity and soil carbon levels in the treated plots versus the untreated plots.
“We kickstarted a positive feedback loop,” Creque described. “Add compost, increase plant growth, increase carbon absorption from the atmosphere, increase forage production, build more soil carbon.”

Hmmm, sounds familiar. Like what farmers have been doing for, say, the past thousands of years or so. Adding manure to the soil helps grow things. And it is good for the soil. And, it turns out, it captures carbon.

There is a growing awareness that cattle and good soil go together, and that is a good thing for all of us. Allan Savory has been teaching this for some time. He is a grassland ecosystem pioneer and he is widely promoting the idea that the way to address climate change is by having lots of cattle stomp around on lots of grassland.His years of scientific study and experimentation on this are well explained in his Ted Talk viewed now by 5.5 million people.

We live in a state (Washington) where our elected leaders seem intent on driving our family farms out of business. They pile on new fees and regulations for farms hiring much needed guest workers and even introduce legislation requiring farmers to report when they are using slaves on the farm. (Seriously!) The idea that cows and manure might be good for the soil is a very, very old idea. But maybe it will enlighten some when it is packaged around the ideas of carbon sequestration, desertification and combatting climate change.