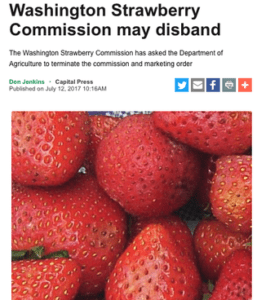 The Capital Press story tells of the slow but almost certain death of a once thriving strawberry industry in Washington state.

Like most youngsters growing up in Western Washington, my first real work experience was picking strawberries. Mom would pack our lunch and bring us to the field, or if you live in the “big city” you rode the school bus. Some days were hot, some cold and rainy, but the weather didn’t matter because you had a job. We ate too many, threw them at brothers, sisters and friends, but a few made it into the flat as we inched our way down the rows. There was a sense of accomplishment as we picked up a full flat, got our crumpled ticket punched and at the end of the season got our well-earned check. It was our money, earned by our hard work.

Those days are gone, a victim of well-intended laws to protect young workers. In the view of many, more was lost than gained by these laws. Other solutions could have been found to protect against the little abuse there was. Employers routinely talk today about the loss of work ethic among the young.

Now the industry is all but gone. Labor costs are without question the primary reason. Despite the fact that a skilled, hardworking picker can earn $30 per hour and more, today’s growers cannot compete against foreign labor – particularly Mexican – where workers are paid more like $10 per day.

Sakuma Brothers Farm in Skagit County provides a sad lesson. The family farm has been in the Japanese-American family since the early 1900s and the entire family endured the Japanese internment camps in World War II. For the past several years it was ground zero for the effort to unionize farm workers. Many of the 400 or so pickers that Sakuma employed were local, had worked there for many years and depended on the much needed income boost that the seasonal work provided. Outside labor agitators came in and with lies, distortions, complicit media reporters painted the “corporate farm” as wage robbers and worse. Funded by union organizing dollars from California and beyond, the organizers recruited local university students who were given class credit and free rides on taxpayer paid buses to protest in front of Costco and other retail stores. Despite paying its workers guaranteed pay above the state’s minimum wage and the strong workers as much as $50 per hour for their production, the agitators won. Acres of strawberries were plowed up, and the few acres that remain will not likely last long. How can they against the extremely low labor costs paid by competing farmers in Mexico and China?

The union organizers staged rallies in downtown Seattle to protest Sakuma. I wonder about those cheering crowds. Did they understand they were forcing berry farmers out or to mechanize at accelerating rates–meaning that few if any small farmers could possible survive? Did they understand they were supporting the lower food safety standards and much, much lower worker pay from foreign farms? Did they know that those farms don’t have anywhere near the same environmental and pesticide regulations as our Washington state farmers have? Did they know that the taste of a very sweet Western Washington berry would become a distant memory? Did they think about what it means to have their berries (assuming they can afford them) come from thousands of miles away rather than from local farms?

Perhaps farmers are to blame. It’s easy to blame the media such as the Seattle TV stations so eager to carry the story that the organizers told and so reluctant to show there was much more to the story. But if farmers, farm supporters and farm organization leaders don’t speak out about these kinds of issues and tell those Seattle folks who are so far from the farms what is really going on, can we blame them? 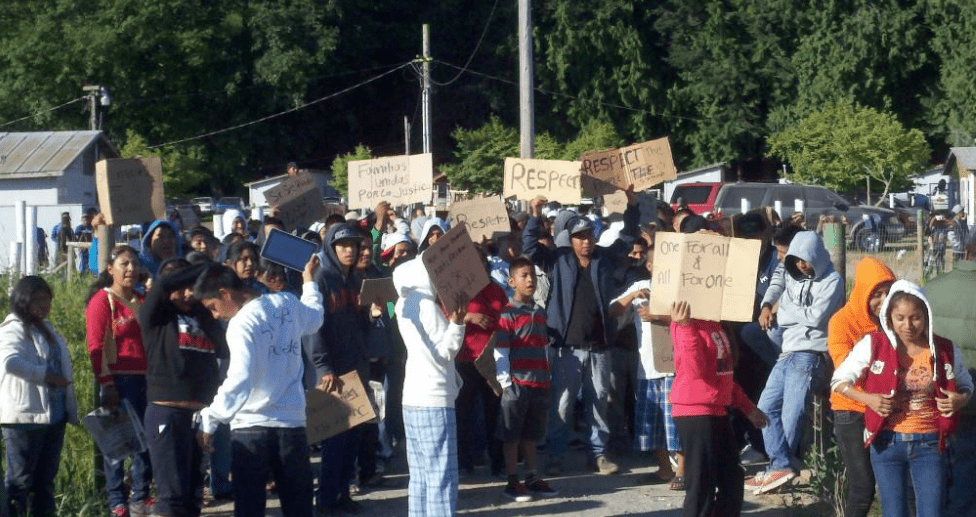