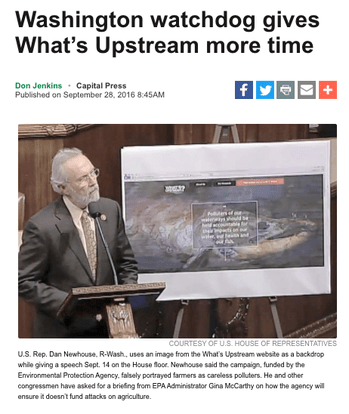 Sometimes you can’t even make this stuff up. Those who have looked at the Regulatory Integrity Act of 2016 will note that it is about increasing transparency and accountability among our government agencies–actually that means the real live human beings who run them. This bill was passed with two recent violations of federal law by the EPA very much in mind. 1) The finding by the GAO in late 2015 that the EPA violated federal laws against lobbying by using social media to promote the Waters of the US Rule and 2) by the EPA funding an overtly (and outrageously false) political campaign against farmers known as What’s Upstream.

This Capital Press story of Sept 28 reports that the White House has said it would veto the bill (if it got out of the Senate.) OK, so the administration is going to protect the leaders of these agencies, we get that. But the reason provided is absurd: that it could lead to a less informed public.

You kind of have to wrap your head around this for a minute, particularly if you have read the bill. By the way, it passed the house with bi-partisan support by 250 to 171. A bill clearly aimed at bringing agency leaders actions into the light of day could misinform the public? Agency leaders who have twice in the recent past shown complete disregard for federal laws against using tax payers money should be shielded from public scrutiny?

​I think we need a better explanation than that.