Help Us Send a Message to EPA: We Want the Truth! 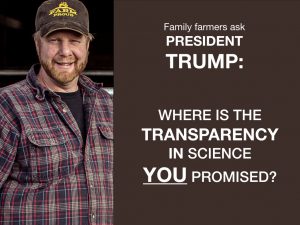 Farmers, farm group leaders and members of Congress across the nation are demanding that a 2013 EPA nitrate report receive the science review it never received. The report has been rejected by every science expert who looked at it, except for those within the EPA. It was supposed to have an in-depth “peer review” but Region 10 staff ignored federal policy and now try to evade that failing by claiming it never needed a thorough science review. They continue to use the false conclusions to force tens of millions of dollars out of dairy farms. One environmental lawyer has used the false report to force legal settlements with dairy farmers and pocketed several million dollars in legal fees.

Your voice matters. We urge you to contact the EPA leaders right now and let them know we just want the truth.

Send a message to the EPA leadership in your own words by using the form below. Just tell them you also want the truth and demand a full science review of the EPA Yakima Nitrate Report. When you submit this, it will go directly to EPA Director Andrew Wheeler and Region 10 Administrator Chris Hladick.

Don’t take our word for it. Here are the facts you can check out:

Read summaries of more than 15 reports submitted by leading scientists from government, academia and the ag industry. Click Here.

Region 10 staff created a false study, violated federal policy requiring outside science review, lied about it to the new administrator and when called on this lie tried to cover up failing by claiming the study did not require outside review. We provided proof of this to Region 10 Adminstrator Chris Hladick.

3. Congress members request long-delayed science review
On  July 1, Rep Newhouse requested EPA Director Wheeler immediately request a “legitimate” science review. Response? Silence. Apparently a tone deaf administration needs to hear from many more before they do the right thing and correct the wrongs of the past. We expect as more farmers, farm leaders and members of Congress hear about this they will add their voices.